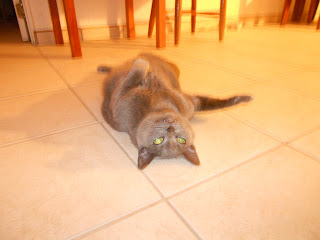 I was really nervous about bringing Sugar down to Belize with me since she's only been in her pet carrier for, like, a half an hour on her way to the vet a few times. She always screamed and howled and got all kinds of cranky every time I've had to take her to an appointment or to move with me into different apartments, so I figured it would be 10 times worse on a plane.

On the way to the airport she made some noises and made it clear that she wasn't very happy with whatever was going on. The poor thing got snatched out of bed at 3am, stuck in the carrier, and then had to take a 45 minute ride to the airport in a very bouncy Jeep - I wouldn't be very happy about that, either.

I had called the airline 2 days before my flight to make the reservation for Sugs, so checking in with her was no problem. My biggest problem was carrying her fat butt around in Atlanta for two hours during our layover - I didn't realize how heavy 12.5 pounds would feel after a while!

She was very well behaved at the security check point - I had to take her out of the carrier and bring her through the metal detector with me, and she just held on to my shoulder and looked around curiously while we walked through, and then went back into her safe spot without any issues. One of the security guards even commented on how calm she was and said he's seen people with full protection gear on when they go to bring their cats out of their boxes.

She shit her pants and peed herself at some point on the flight from Atlanta to Belize City - but I kind of expected that and really... I still don't know if there's anything you can do about it or not. Luckily, it didn't smell horrible and I don't even think anyone noticed.

I didn't have the correct paper work when I arrived in Belize - I had depended on my friend and the vet she works for to take care of all the health certificates and stuff, and apparently I had all the right information, but I didn't have the right form. I also didn't have my permit from BAHA, which I should have taken care of through fax/email a few weeks ago.
You can get the correct info and the forms you need here: http://www.baha.bz/animal_health.html

I think the man working in the BAHA office was trying to tell me that, since I didn't have the health certificate, Id have to leave her there and buy her a ticket to get back to PA... but I wasn't going to let that happen. I must've looked like I was about to cry (because I was) and I asked what other options we had here. ("Can I just get her to San Pedro and I'll bring her right to the vet and get her whatever it is she needs?? Can you call my vet and have them fax the right form? I'll wait... I'm just not leaving my cat)
He was nice. He charged me $100 USD (threw it in a drawer... no receipt...) and let me through. I wasn't able to get the permit since I didn't have the health certificate... so now I think Sugar is here illegally. I don't care though - we got through and by the time we were on the puddle jumper to San Pedro, Sugs was already an experienced flyer and didn't bitch at all on the flight.

She did, however, have a big problem with the taxi once we got to the island, and I don't blame her. Our driver was horrible, he kept tailgating golf carts and slamming on his brakes, and he'd try to pass people but have to swerve back onto his side of the road to avoid running over pedestrians... BUT, we made it!

She found a good hiding spot in the guest room closet, she scarfed down a bowl of food and a mug full of water, she's checked out her litter box and found a good spot to lounge on my bed side table, and she's been following me around and laying on the floor next to me for most of the day.

I hope she isn't too lonely without Muffin and Bubby, but I think she'll be happy here. I'll introduce her to the balcony in a few days, after she's familiar with the inside of our place, and I'm going to ask Walter to build her some kind of scratching post that she can sit on - somewhere that's just HER spot. 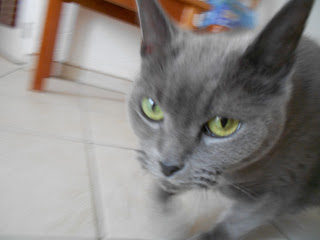