A Belizean Legend... or soon to be proven true?

Most books and websites about Belize will tell you the rainy season here is from June-November  -Belize Facts- but that doesn't mean that you don't see rain during the other months. When I moved to the mainland in February it poured, off and on, for about 3 weeks. 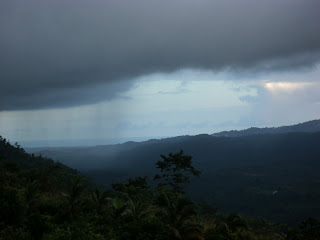 Storm coming in from the Sea

Robert told me that it rains in February because, "The iguanas need to lay their eggs."

I asked him today, since we haven't had anything other than a few night time showers so far in March, if the rainy season is over now. He said, "No, there will be one more storm, a big storm with lots of thunder and lighting, and it will be over Easter weekend. After that storm, the iguana eggs will hatch and the rainy season will be over."

I looked up "rainfall in April," specifically (since Easter weekend this year is April 6-8, with my birthday in the middle) and this is what I found:

"April ushers in the onset of the rains caused by the heating of the land. Huge thunderstorms begin to build over the hot Maya Mountains. The easterly trades are losing their force and the thunderstorms often move toward the coast. These afternoon buildups are beautiful to watch, with most of the lightening hitting deep within the Maya Mountains. Toledo has another dry month of only about 4 inches of rain, and the Mayan farmers wait till after the ground is soften by the rains to begin to plant their corn or burn the bush. In the north, the rainfall is very sporadic and go by the local name of "Iguana Rains". ﻿

I love Belize lessons like this - it's like learning that you can't plant plantains during the full moon because there's too much water in the ground and they'll just end up bursting.

Come on out, little guys - it's time to start the dry season! 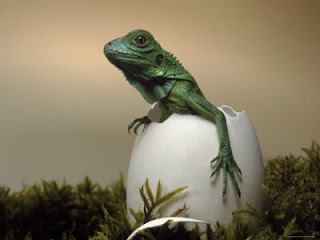