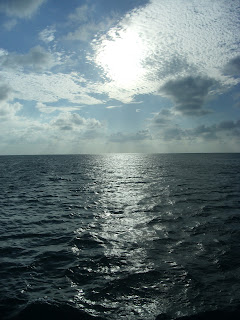 I was originally planning on leaving Caye Caulker at 8:30 on Sunday morning, when my sister headed back to the States.

The Flyers/Penguins game was on at 1 o'clock Sunday afternoon, though.... and I haven't seen a hockey game in so long... and it's playoff season.... so I decided to stay one extra night and watched the game at the Barrier Reef Sports Bar. (Flyers won)

One extra night turned into two, and if I had more clothes with me than just a skirt, a shirt, a dress and a bikini, or if I had more than a couple hundred dollars in my bank account, two extra nights could've easily turned into an extra month. I don't think I'd want to live there full time, but I always have such a hard time leaving. I don't feel that way about San Pedro or Tobacco Caye... only Caye Caulker.

Reluctantly, I packed up my things this morning and headed to Belize City on the 10:30 water taxi.
I usually love the water taxi - I find any kind of boat ride relaxing and I generally just zone out and enjoy the ride. Today, though, the ride sucked.

First - it was crowded. I guess I've been super lucky while traveling to and from the Cayes these last few years to never have been stuck on the water taxi when it's carrying close to it's full passenger capacity. As an introvert, just seeing that many people crammed together made me uncomfortable. 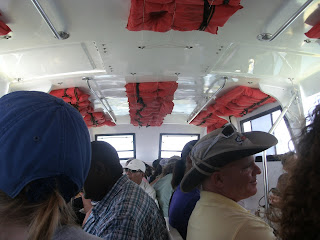 I, surprisingly, found a comfortable enough spot on one of the outer benches that run along the wall of the inside of the boat. I even had a few inches of personal space... but about 2 minutes into the ride, I found out why no one else had snatched up the seat before me. The guy to my right was sea-sick.

Hearing him hurl twice was enough for me - I had to move before I started joining him and would have to ask him to share his vomit bag.

I found a spot on the inside bench, down away from Mr Pukey, and squeezed myself in between a sun burnt American kid and a woman who's purse was taking up more space than I was.

Behind me was an overweight Belizean woman in booty shorts and her three children, all under age 6. While she was busy on the phone, her children were moving around under and on top of the seats... basically on my shoulders. My hair was getting pulled from all their climbing little sticky fingers and I kept getting elbowed in the back of the head. Eventually I turned and sat sideways and rested my arm up on the back of the bench and ruined all their fun.

When we finally got to the city I immediately went to the first empty bar and ordered Salbutes and a Lighthouse. Just a few minutes of space and quite made me feel much better. 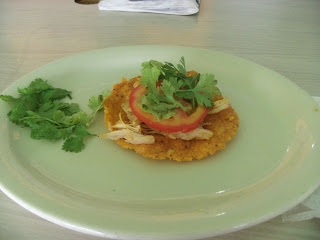 I was going to get a taxi to the bus station and take the 4 hour ride to Dangriga, then take a 40 minute taxi ride to get home... but after my boat experience, I opted to just hop on a plane instead.
I got to Tropic Air 15 minutes before the next flight to Dangriga, AND..... 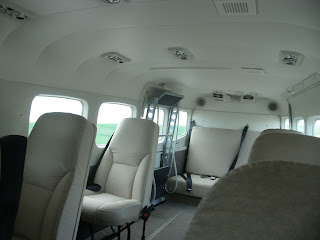 I had the plane to myself for the first 5 minute flight to the International airport!

Only 4 other passengers got on at the international, so it was still pretty sweet, and when we landed I met a really nice taxi driver named Manuel who took me to pick up my laundry and was able to drive all the way up my mile long driveway in his little 2 wheel drive Toyota.