Belizeans believe that having sex in your car is bad luck. If you do have sex in your vehicle, you have to sell it because it will get into a bad accident. (The Ranger that we bought here keeps getting messed up... someone must've banged in it.)

Fishermen used to (maybe they still do?) throw their baby son's navel scar out past the reef, into the deep blue sea, so that they boy would grow up to be a good seaman/fishermen and not get seasick. Whenever a young man got seasick, other men would say, "Your father didn't cast your "tuch" (navel scar) in the sea."

In order to get some wind on very calm days, fishermen would throw money - a penny, nickel or dime, into the sea and ask to buy some wind. They would never throw a half dollar because that was a lot of money, and it might buy you a hurricane.

Belizean natives will not swim in the lakes or sea during the Good Friday-Easter Weekend - they believe that if they do, they will have bad luck. (Im still trying to get a better reason than this, I might have to check with the elders....) This must be a very old superstition that didnt carry on, because I saw a bunch of people swimming in the Caves Branch River over Easter weekend.

There is some kind of legend about a 3 foot dwarf with no thumbs that lives in the jungle,  it's referred to locally as el duende, and he looks for kids who are trying to kill the local wildlife and punishes them. Again, no one that I know is afraid of killing wildlife here - gibnut, skwash, pregnant iguana, and now this turtle..... 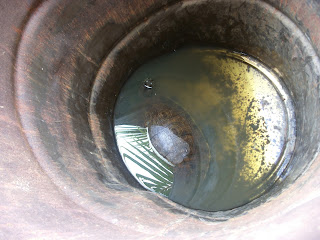 That's all I have so far, but Robert is always telling me interesting things about Belizeans and their beliefs.

Something I thought was odd - they also believe that it's bad luck to have a black cat cross your path, but breaking a mirror means nothing to them.
Posted by Unknown at 10:20 AM