It's almost time for me to apply for my Belizean residency, so I bussed it to Belmopan yesterday to pick up my paperwork.

I had run into *Bolo's mom the day before and told her my plan, so she offered to go with me and was down there waiting when I got to the bus stop at 7:30.

There were kids from the village waiting for their bus to school, and a woman named Consuela who was waiting for the bus to Dangriga with her grandson. Everyone was talking about the Belize Agriculture and Trade Show that they aren't going to this year because of the gang threats. (Two gang leaders were killed by police recently, and now the gangs are threatening to show up at the fair grounds this weekend to retaliate. The place is packed with security, though, and they have police checkpoints on all the roads leading to the fair, so hopefully all goes well.)

The 8 o'clock bus to Belmopan came.... and kept going.
Lesson one - getting a bus on a Friday morning can take some time.

Bolo's mom decided that she didn't want to wait another hour for the next one, so she ditched me and hopped on a bus headed for Dangriga, in the other direction. (She did invite me to tag along, but I was on a mission.)

The 9 o'clock bus didn't show up or drive passed me.
Lesson two - there is not always a bus every hour.

I've definitely gained some patience by living here. You need it in order to not go crazy sometimes.

Around 9:20, Bolo showed up, riding on the front of some other guys bicycle, so he stopped to say hi and asked what I was doing. I told him the whole story and he just laughed, looked at his watch, and told me to come with him. Again, since I regularly say yes to things without asking any questions,(The Fish Thing in Caye Caulker) I followed him - first to his moms house, and then to a bar called *Yesenia's that is between Alta Vista and Steadfast on the Hummingbird Highway, where he bought me a couple of beers while we waited. After a few minutes, I heard the bus in the distance. (It's so quiet here that you can distinguish what kind of vehicle is headed your way before you actually see it.)

We walked to the end of Yesenias driveway and Bolo told me to put down my beer, and then he waved the bus down to stop for me. It was 10:15am.
Lesson three - a bus will not stop for you if you have beer in your hand.

Most of the busses here are old school busses that have been brought down from the States, and I noticed that the one I was on came from Fort Valley, Georgia. I just plopped down in the first seat next to a man with a very deep, froggy voice and enjoyed my slight, early morning beer buzz.

There are a lot of speed bumps here in Belize, and at one in Steadfast, in particular, there are always people sitting there with a cooler, waiting to sell passers by cold coconut water or warm corn on the cob when they slow down. Our bus driver and conductor, along with the man next to me, all bought some corn when we had to slow for the bump.

I couldn't keep myself from smiling during the hour long bus ride - I felt like I was on a roller coaster. I don't know how fast we were actually going, but it felt like we were speeding down the highway, up and down hills and around bends where, I swear, the bus driver had to use his whole body to control the steering wheel.
Lesson five - the bus will drop you off or pick you up wherever you are, if they have room for you. You just have to flag them down or tell them where you want them to stop, and you got it.


When we got to the bus station in Belmopan, I met up with my friend Bob and he walked with me to the immigration office, where I picked up my paperwork, and then we walked through the park (which I didn't know existed) and went to this great little restaurant called Formosa. 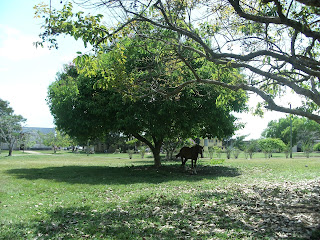 Nice horse, chillin in the park 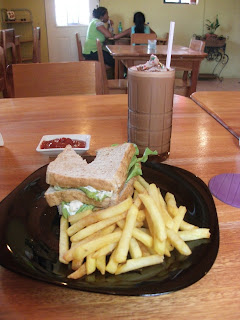 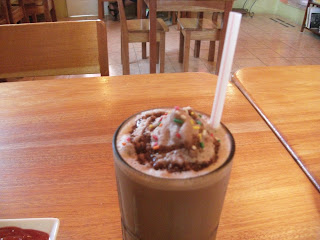 After lunch came complimentary dessert, probably because Bob is such a loyal customer... 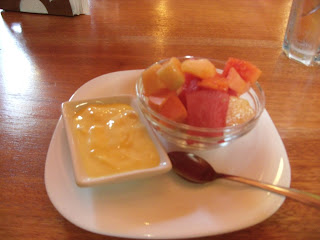 When we finished at Formosa, we walked back through the park, stopped at the police station so I could find out what I need to have with me for my police interview (one picture of myself and an ID) and then stopped at the market so I could pick up some veggies before heading back home.

Getting on the bus at the Belmopan bus station is an interesting experience. The line I wanted, for the bus heading back to Dangriga, is all the way at the back of the building, next to the concession stand area, where people are selling food and drinks. One lady was behind the stand singing:

She had a really nice voice, it was cute.

When our bus showed up (we're inside the building, behind a closed door/gate that faces the parking lot) the lady announced, "Your bus is here! On your mark.... get set..." and once the door was open, "GO!"

She was right, it was like a race to get through the door and onto the bus. People were shoving their way through the crowd and bumping people out of line, determined to get on. (They have a sign for 84 passenger capacity, but I think more were crammed in there)

I made it on and got a seat near the back next to a guy who was apparently sleeping, even though he had sat down literally 30 seconds before me. Applying my knowledge from lesson number four, when the conductor came around to collect money from me, I told him I was going to Alta Vista and handed him $4.

I made it back to the village bus stop around 3:30, I think. I waited for Robert to come down the hill in the truck, and then we went to run some errands before heading back up.

When I got home I really started looking at all the paperwork for the permanent residency. Next week I have to get a medical exam and HIV test, have passport photos taken, get a police report filled out, find a Justice of the Peace to notarize my application, make copies of every page in my passport and of all the paperwork, and then get back to Belmopan to hand everything and ask, for the 5th time, if it's ok for me to leave the country for a few more days. When I get back to Belize, I should be able to get an appointment for a formal police interview and an interview with an immigration officer.... and after that, it's just more waiting. (The wait can be from 2-9 months, from what I've heard)

*Bolo's mom - That's what I've been calling her since I met her, 3 months ago. I found out yesterday what her real name is, but she told me that no one in the village knows what it is, so I'm keeping the secret.

*Yesenia's bar - It isn't a bar at all. It's the owners house, they just sell drinks and snacks out of one of their windows. There are a lot of "bars" like this in Belize.