No no no, you crazy kids, it isn't snowing in Belize.

I just think it's funny how many things you can buy here that have a snowflake pattern on it... and even funnier that none of the Belizeans that I've asked about it know what they are. Like this plastic cup that Robert bought, for example: 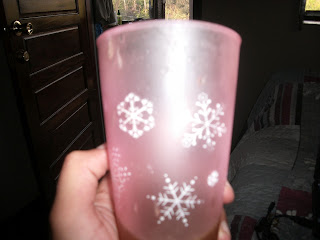 When I asked him if he knew what these little white things on the cup are, he stared at it for a minute and then said no, he had no idea what they were.
The same thing happened last week when I went into one of the little bodegas in Dangriga and asked for a nail file - the girl handed me one of those boring, plain, brown emery boards and this blue one with the snowflake pattern: 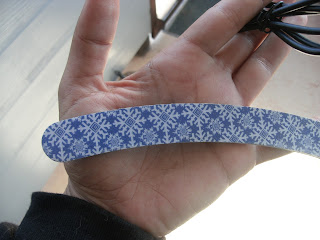 I told her I'd take the one with the snowflakes and she just gave me a confused look, so I picked it up and asked her if she knew what the pattern on it is. She took it from me, looked it over, then handed it back and said no, she had never seen that pattern before. When I told her that they're snowflakes, she got a big smile on her face and took it back to look at it more closely. She brought it over to another girl working there and told her about the snowflakes and they both giggled.

I promise you, if it ever starts snowing in Belize, I'll start looking for somewhere else to live.
Posted by Unknown at 8:12 AM