I still don't know if this chicken is a hen or a rooster, and I don't want to do this: Sexing Chickens, to find out. I've met some people who say that, because she/he has longer tail feathers (butt fluff, as I call it) it means it's a boy. Other people say that the longer butt fluff means it's a girl. I guess I have to just keep waiting so I know if it's name should be Camilla or Gonzo.... although it doesn't really matter since I always call it "Turkey," or "Penguin." 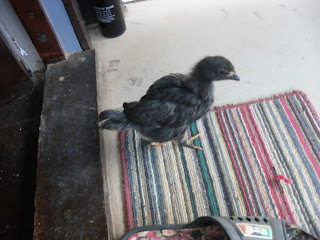 On Friday, "Turkey" will be one month old - she's already been to Cahal Pech, San Ignacio, Dangriga, Antelope Falls and random spots throughout the Stann Creek district. She's also been stepped on by a large rooster and in two car accidents.

Yesterday, she got to go on her first bus ride with me to Belmopan. (Nope, no big deal here to carry a chicken on the bus with you here.) 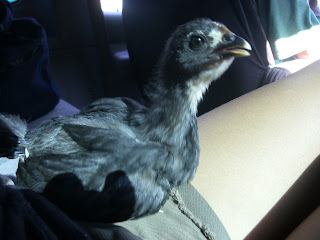 Once we got off the bus we went across the parking lot to a bar called Charishma, where Turkey enjoyed a light snack and a cold, refreshing beverage.... as did I. 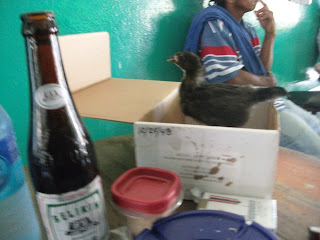 Eatin in the box 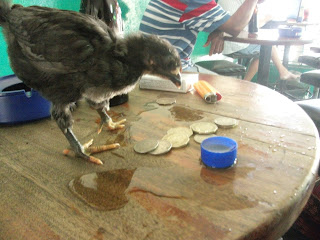 Makin a mess on the table

I didn't get a picture of our nice bartender, Esmeralda (I have a chicken named Esmeralda!) but I did bump into Carol, from San Pedro, and she was nice enough to pose with the baby chicken for me. 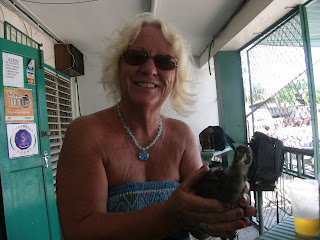 After drinks at Charishma and lunch at Formosa (free carrot cake and ice cream yesterday) we ended up getting a room for the night at the Bullfrog Inn -which has a very nice room and decent shower, and a good bar/restaurant in it, but a little bit pricey ($140bz for single, $170bz for double occupancy) 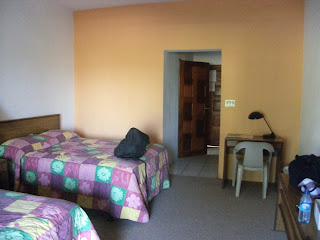 Today we just ran some errands in town before heading home, and we stopped at the
Country Barn for some homemade, Mennonite ice cream and a pee break for the chicken. 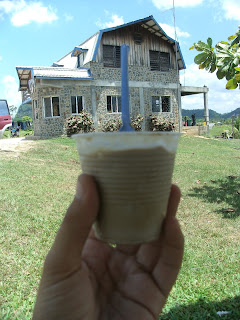 Ya'd think that a Mennonite girl would know what a baby chicken looks like, right? The girl working today asked what kind of bird it is and sounded surprised, and a little disappointed, that it's a chicken.

Someone suggested I get her a passport and take her on a tour of Central America with me... but I think it might be time for this penguin to start acting more like a chicken and start spending more time at home, out in the yard.... like a normal bird. What do you think?