The Bus in the Orchard

Update to A terrifying walk through the orchard

No one has been back to the bus to check on things yet - but Robert told me that there is a family living back there - a Guatemalan man with his Salvadorian wife and their 3 kids. They have a little concrete house back there somewhere that I guess I didn't walk far enough to see, but they use the bus, too.

He said I shouldn't go back there anymore because he doesn't know them very well and he thinks that there's another guy living back there, too. (With them or on his own, I'm not sure. All he said was that he thinks it's the brother in law or something.)

He told me some other things about them, but I don't think I should post other people's personal business online... They just sound a little shifty, is all.

I went for another walk with Clive yesterday and a took a few pictures to give you a better feel for where I was. I didn't go all the way back to the bus, and I actually got told by Trip AND Robert that I shouldn't go back there at all anymore. Damnit. 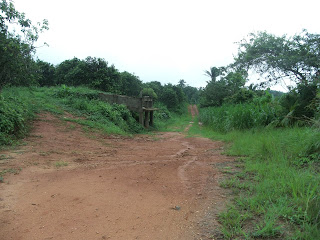 This is the path to the right of the back of my property and the loading dock for the oranges. Those are all orange trees behind it, obviously. 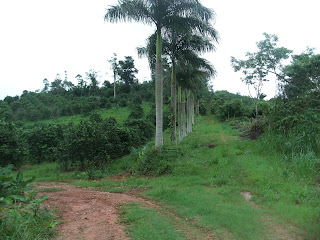 This is where I went left instead of straight. I wonder who planted all those Royal Palm trees. 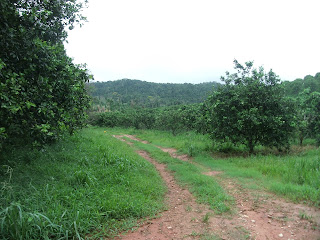 The path the bus is on. 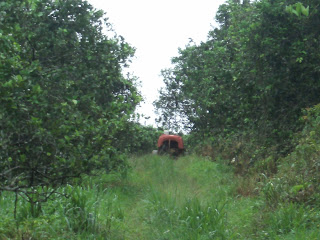 And this looks like some old car parked back there off of another path I took to get home.

Robert says he goes back there with his slingshot a lot and he'll check in on them sometime soon. (I'd like to point out that I still have not gotten my own slingshot, and I'm a little bummed out about it)

I'm sure everything's fine, now that I know that it's not unusual for people to be back there. I thought it was, like, two totally random people back there for no good reason. Probably just a family argument.

Email ThisBlogThis!Share to TwitterShare to FacebookShare to Pinterest
Labels: the bus in the orchard, update in Belize, walking in the orange orchards