Postcards, Puppies and Farming... things that make me happy

I got my first postcard!!! What makes it extra cool is that it's from one of my blog readers - Sandy in Arkansas - and not even from the Postcrossing site! 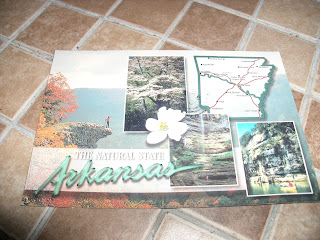 Thank you, Sandy!! I never realized how pretty Arkansas is!
Come them coming, people!

The boys here were supposed to take the truck into town yesterday to run errands and stuff - but the truck wouldn't start... so I somehow got volunteered into taking the bus to Dangriga to do everything.

I got into town around 12:30, stopped at the bank, and then went grab some lunch at Ponce's Panades Shop across the street from the Western Union. If you only have $5bz to feed yourself in Dangriga, I'm pretty sure this is the place to go. They sell huge burritos for $2.50bz - I mean HUGE. You could feed a small family with that thing. I decided to go for two Salbutes and two Fry Tacos ($2bz) and was totally full after I ate.

It was 1:15 or so by the time I left Ponce's and Western Union still wasn't open. (If you don't know this already - almost everything closes for an hour to an hour and a half at lunchtime in Belize)
I went to the market to get some veggies, and then back to Western Union. The sign said they re-open at 1:30... but it was a lie. It was 2 o'clock by the time they raised the gate.

I waited the whole time because I REALLY wanted to get my money over to San Pedro so I can grab two of the Lobsterfest Koozies! 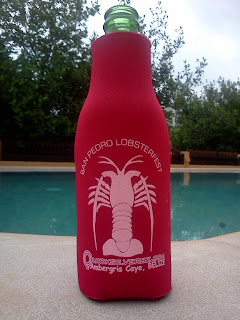 After W.U, I stopped at two different Chinese stores for groceries and dog treats, bought about 20 more postcards to send to my postcard buddies, got my passport stamped at the immigration office, went to the post office to mail postcards, stopped at the Hummingbird Distributer to buy staples and a new gas tank, and then called a taxi to bring me and all of my stuff to the bottom of the hill.

Luckily, I didn't have to carry any of that stuff up the hill with me because Robert and Bolo were waiting for me when I got there.

I wish someone else would come here and walk up my hill with me so you know what I mean by "hill." I just can't describe it well enough. It's a hill from Hell.... and I've walked down and back up about 5 times this past week. I say it doesn't get any easier - but I can get up in about 45 minutes instead of an hour now, and I can still move my legs the day after I do the climb, so that's good, I guess.

I wanted to go to the Placencia Lobsterfest this weekend, but the arrival of the new furry farm friends changed some plans. 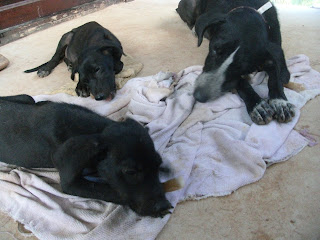 My ladies with their bones and blankies

I'm so so soooo happy we adopted these dogs. Mama Firefly is happy and well behaved, and the puppies are just the cutest little things with totally different personalities. Penelope is a little bigger in size, but she's shy and she doesn't like to tag along on Mama's runs as much as Clem does. Clem is tinier, but she's feisty. 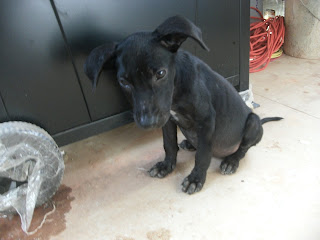 and they both have Gremlin ears

Hey, I have a question... where did I get Penelope (Pee-Nah-Lope) from? I know it's in a movie.... some guy reads some girls nametag wrong and calls her Peenahlope.... Help me out, I totally forget what movie it is.
I named Clementine, "Clem," because my friend Chris, a long time ago, wrote "Clem's Den" over some drain pipe behind the school that she went to and I remember telling her I'd name a pet Clem one day.
Yesterday was 12 years ago that she died... RIP Chris Haws.
Mama Firefly is, of course, named after The Devil's Rejects character. Maybe one day I'll get my Captain Spaulding and Otis Driftwood pets...

We're building a greenhouse - that's new!
Our soil here isn't really soil, so much, as it is red dirt, so our tomatoes and pepper and onions and things haven't been having the best time growing. We decided that raised beds filled with rich, black soil from inside the jungle will be much better, and the greenhouse should help protect everything from the sun and bugs... hopefully. 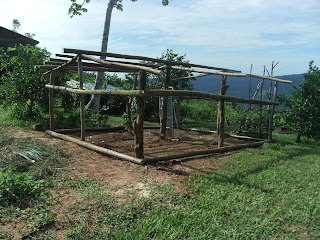 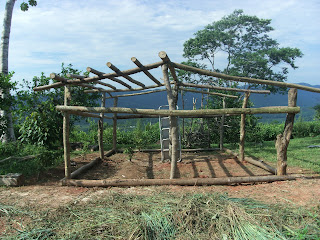 They're going to line the whole thing with screen and chicken wire, then we can start growing.

Well I guess that's about it for today. Julio and Fernando's mom just sent up some hot tamales for us, so I'm going to have lunch and then go play with the chicken for a while so she doesn't feel too left out.

Don't forget to Like me on Facebook and send me postcards!! Thanks again, Sandy!!!
Posted by Unknown at 11:09 AM