Me VS The Hill

I was really looking forward to going out today - I haven't left the hill since Friday, and I'm getting a touch of cabin fever, I think.
When I woke up at 6:30 it was pouring outside, but by 7:30 the sky was clearing up a bit and I planned to make my way down the driveway in time to catch the 9 o'clock bus.
I started walking around 8:15, but I had to turn around before I even lost sight of the house because Mama and Clem were following me. I had Trip occupy them in the verandah and tried again. 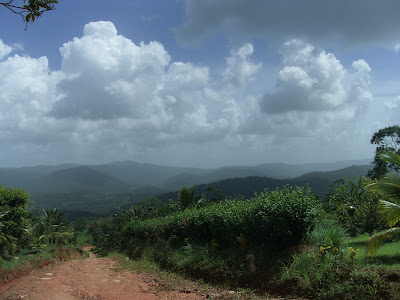 The road was muddier than I had anticipated, and I started sliding all over the place. Flip flops were not a good idea today, but I despise wearing shoes and shocks, so I try to do everything in flip flops. I've regretted it once, so far - wearing flip flops to Lamanai wasn't very smart, either. My feet were attacked by Leaf Cutter ants and I was in some serious pain for a couple of hours.

Anyway, I was making my way down one of the steepest, muddiest parts of the road when I heard dogs running up behind me. Mama and Clem again, and Clem looked like she had rolled halfway down the driveway - she was covered in mud!

Just then I heard another dog bark. Coming up the hill was one of the men from the village with his three sons and their gorgeous pit bull.
Mama ran down to check him out and they started fighting - on their hind legs, teeth out, horrible growling... It only last a few seconds before Mama came back over to me and the pit started sniffing Clem way too aggressively. We all yelled at him and he, thankfully, let her be and let one of the kids grab him and walk him past us.

I was pretty much done after that. I didn't want my dogs following me all the way down to the highway and I was definitely going to miss my bus, plus it started to rain again. I walked back up, got the dogs inside, and then went back to bed for the majority of the day.

One way or another, I'm getting out of here tomorrow!

Like me on Facebook  for daily nonsense, articles, pictures, and other stuff
Posted by Unknown at 12:48 AM