Spending time with the locals

I went back to Santa Elena on Wednesday to see Marley and get my dreads tightened again. I didn't get to soak them in the sea before my appointment because of the rainy weather we've been having all week, but I did finally wash them and it felt so, so good. (Pictures soon, I promise)

When I was done at her house I started walking down the back streets to get to the wooden bridge that crosses over to San Ignacio. On my way, I got called over to say hello to a guy who was sitting outside of his place with a few kids. I went over and introduced myself and noticed his horses in the back, so he took me over to see them.

There were a bunch of guys working on his property - some were busy fixing a motorcycle, one was tinkering with a truck, and a few more were in the process of disemboweling a large, dead pig that was hanging from a tree.
I could not stop watching this process for some reason - the whole time I was petting the horses and checking out the awesome view of the river I kept looking back at the pig. I asked Jack (my new friend) how they kill the pigs, but he wouldn't tell me. He said girls shouldn't think about that stuff.

We hung out for a few more minutes before I had to go and meet Janell, and before I left he invited me to stop back sometime to hang out for a barbeque.

I found Janell, her brother, Colin, and their niece, Quvanni near the market and we got a bite to eat at a place called Ko-Ox Hannah (Let's go eat) and then went back to their house to chill for a while.
There were a  bunch of cops roaming around the neighborhood when we got there, so we just sat outside and waited to see if anything happened - a drug bust, a raid, something like that - but nothing ever came of it. I'm pretty sure it's a well known dealer neighborhood, so maybe they were just there to check on things.

One of Janell's friends showed up sometime around 9 o'clock - a really nice, funny girl named Kimberly who I liked a lot. Kimberly's sister had just passed away on Monday night, so the three of us girls went with her back to her sister's wake for a little while. I felt a bit out of place, having never met the girl, so I just stayed outside and talked to the few people out there.

After getting Quvanni back home and to bed sometime after 11, Janell and I decided to go to the casino.
I didn't have much money to waste on gambling so I just gave up $20bz to the first slot machine I sat down at, called it quits and spent the next two and a half hours sipping on beer and eating a chicken burger from the restaurant.

There isn't much to tell you about the casino. There were 3 or 4 poker tables that each had about 5-7 people playing at them, and the rest was all slot machines. I estimated that there were only about 40 people in the whole building, including the staff.

We left there around 3am and I made friends with more stray dogs on the walk back to Janell's. Locals think it's so weird  of me to do that.... but I think everything deserves  a pat on the head once in a while.

We had wanted to go canoeing on Thursday morning, but I didn't wake up until 10 o'clock and didn't have much time left. Well... I didn't think I had much time left... turns out I did.
I caught a bus around 11:30 and headed to Belmopan where, when I got there, Trip texted me and told me it was pouring in Stann Creek and that if I came home I was going to have to walk up the hill because the truck wouldn't make it.
I went into the Charishma bar to think about what I wanted to do and ran into my buddy Kingston and his friend Pech from a village up north. We had a few beers and then went to get some panades from one of the street vendors and talk a walk in the park. Pech wanted to introduce me to his mother first, so we went and found her to say hello on our way.
By this time I had decided that I didn't want to go home and had an offer from Bob to let me crash on his couch.

I was clearly not being all touristy while I was out this time. The only picture I have for you is of this tiny kitten that I found in Belmopan on Thursday night when I crashed at Bob's house. 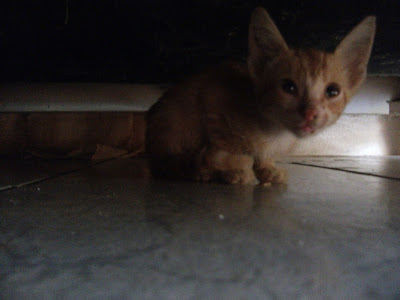