I haven't been able to post in a few days because I'm unable to keep my laptop charged here at home, and when I went to town on Monday, I ended up waiting two and a half hours for a bus and lost a lot of time.
Man, I miss electricity.
If I'm feeling better tomorrow I might try to get to Belmopan to charge up and maybe catch you up on what I did while I was stuck at home for 6 days last week when the hurricane was passing by.

We had some RAIN all week... but yesterday was perfect and beautiful and Trip surprised me with an unplanned day at Tobacco Caye - my favorite island (so far) here in Belize.

Yes, I've posted about it before - Tobacco Caye - I'll be back soon! - so some of the pictures might look familiar, but there ARE some new things if you stick with it. 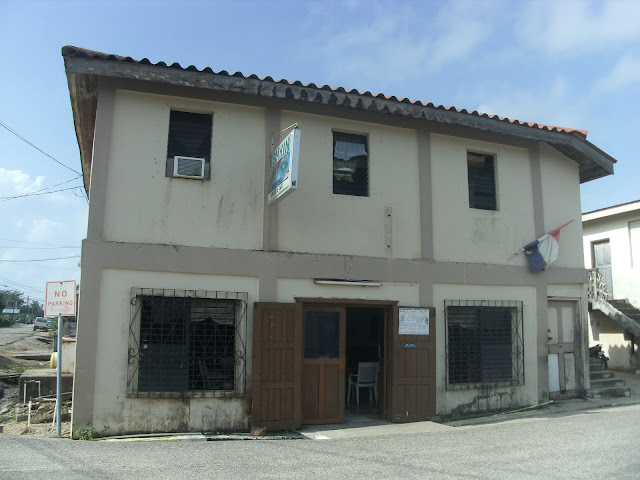 The Riverside Cafe - where you have breakfast and wait for your captain to get ready. 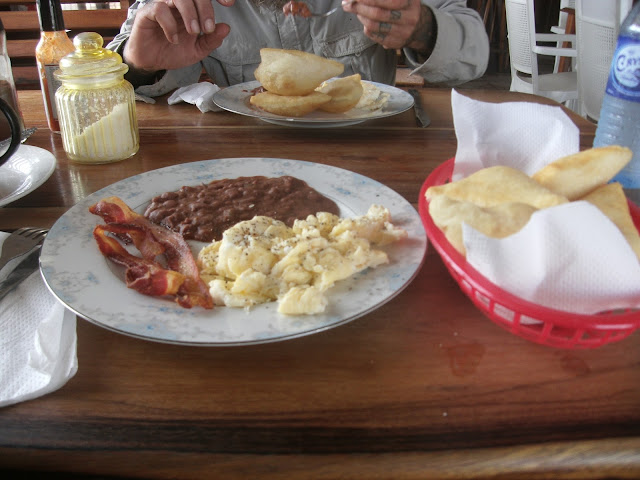 After breakfast, we met up with our boat captain - Captain Munch - and headed out to Tobacco Caye. 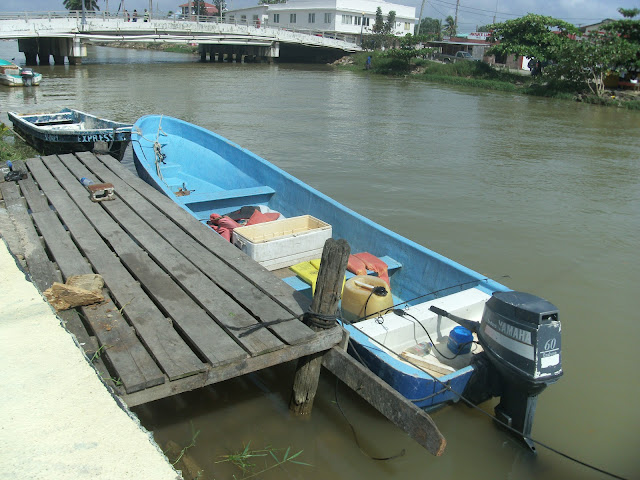 Munch's boat - the river is so muddy from all the rain 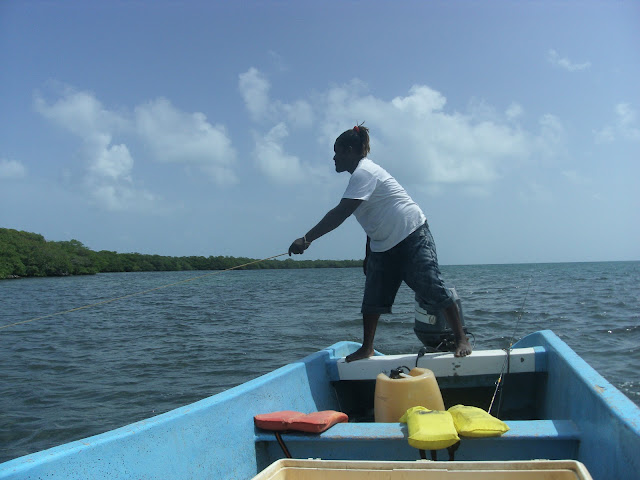 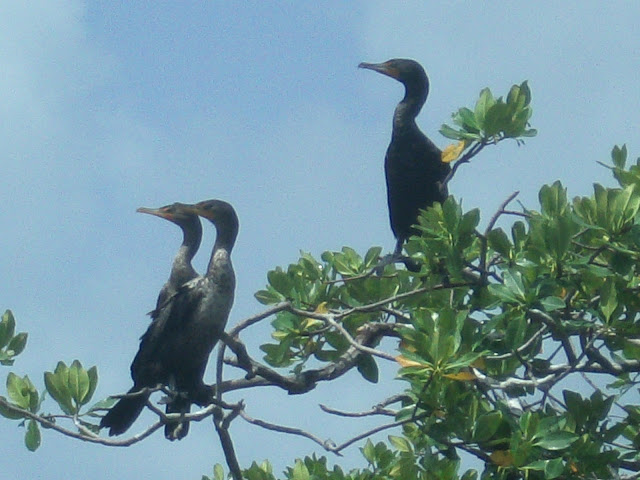 The "diving ducks" of Belize

We docked at Tobacco Caye around 11 and felt like we had the island pretty much to ourselves. There were a few locals around - the kids were swimming and jumping off the dock and the adults were either working or just hanging around. One gringo chic and a French family of four were the only other tourists there while we were around. 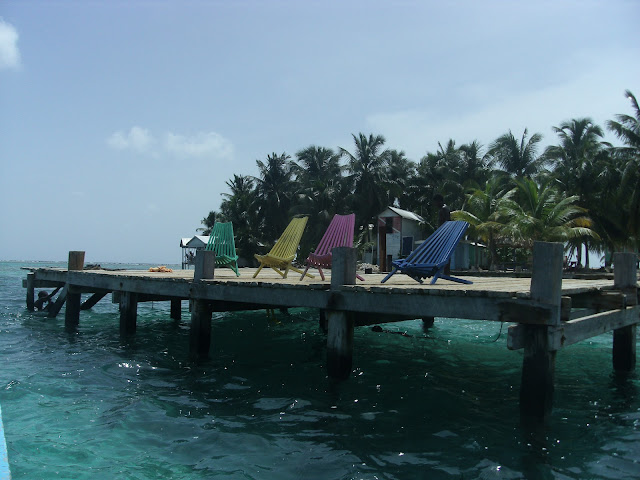 The dock - I love those chairs 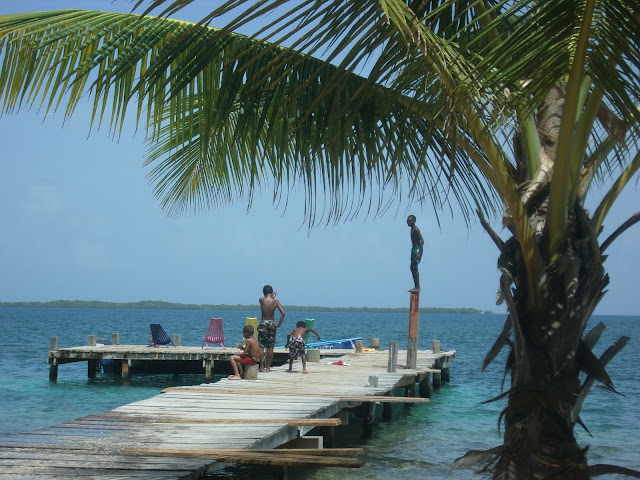 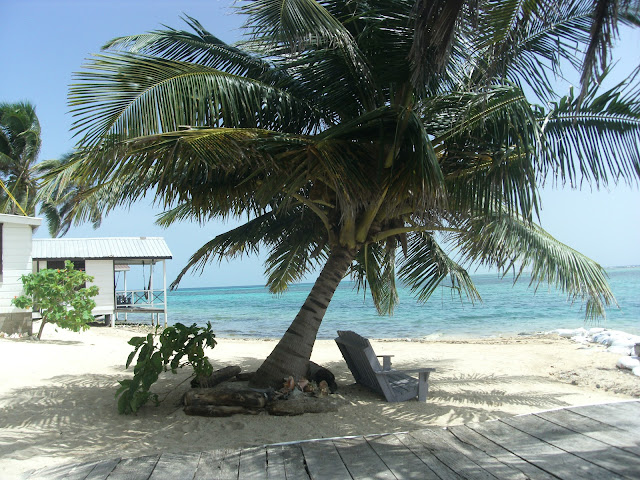 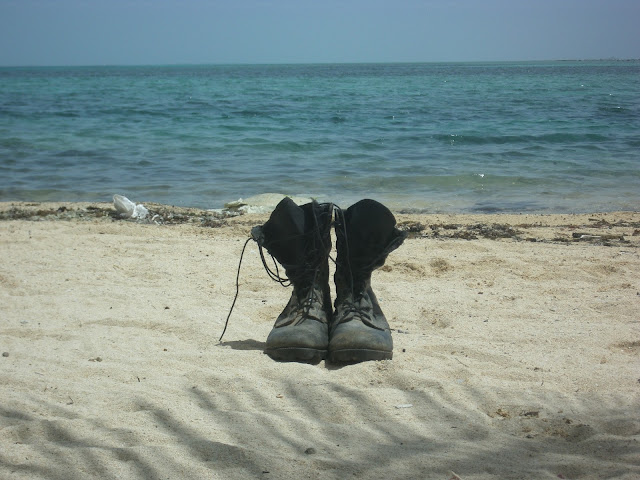 Trip's combat boots on the beach
After swimming for a while and finally soaking my dreads in the salt water, we went over to the Reef's End bar for a few beers. 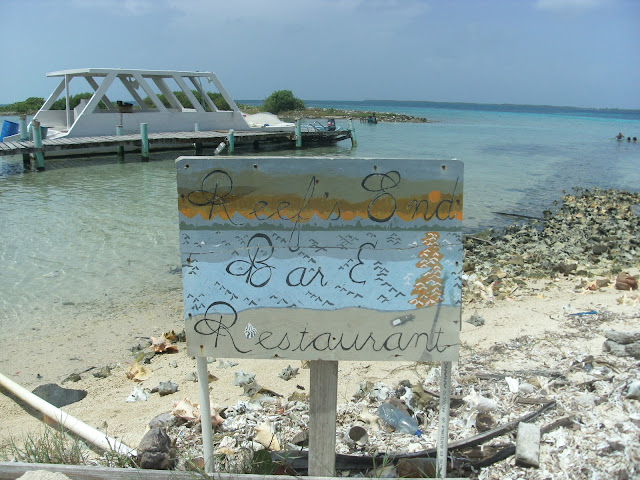 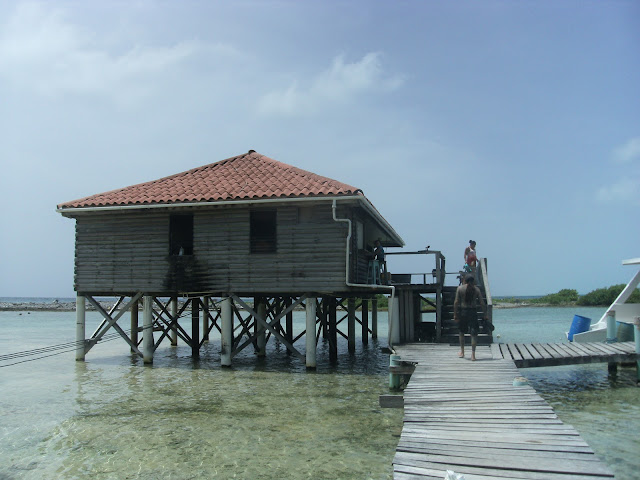 They were out of beer though.... our only option was Coconut Rum Punch: 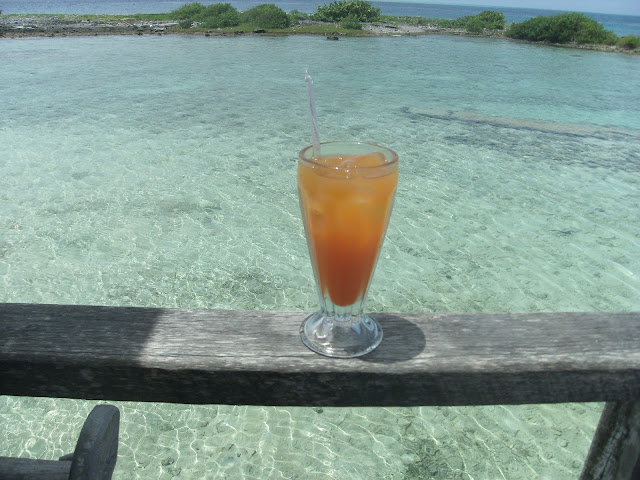 We spent another hour or two in the water and then watched some kids fishing from another dock before stopping at the Tobacco Caye Lodge bar before heading home. They had a full supply of Belikin... and some Bacardi Limon... 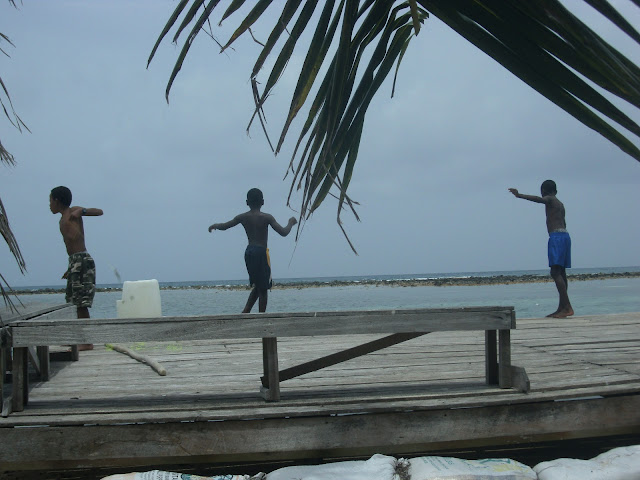 They caught two nice sized barracuda while we were watching 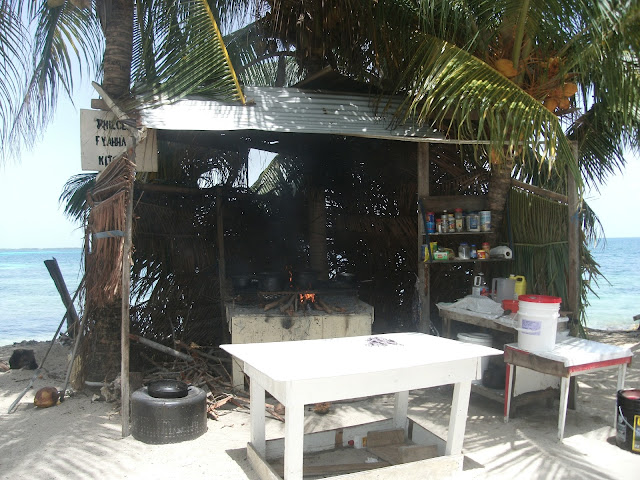 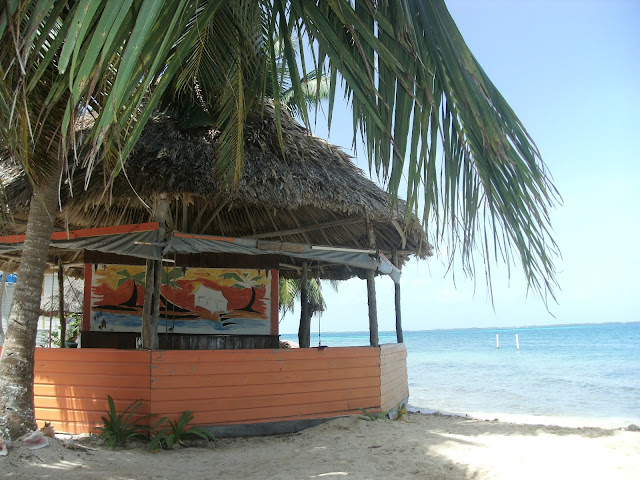 Great spot to end the day 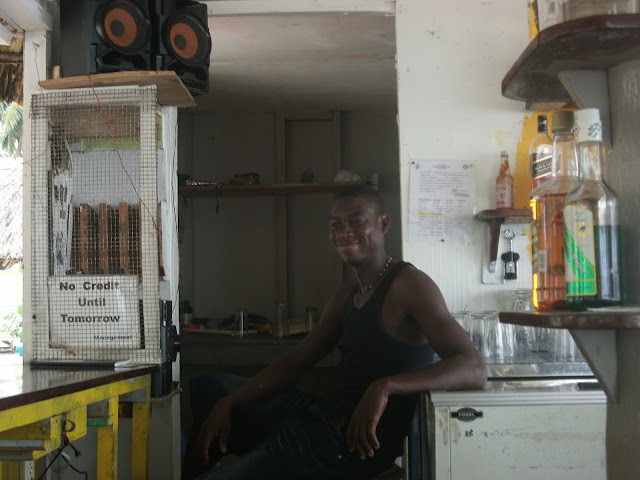 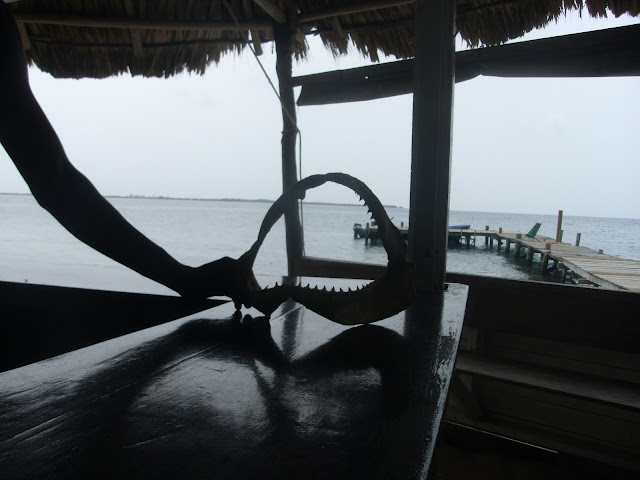 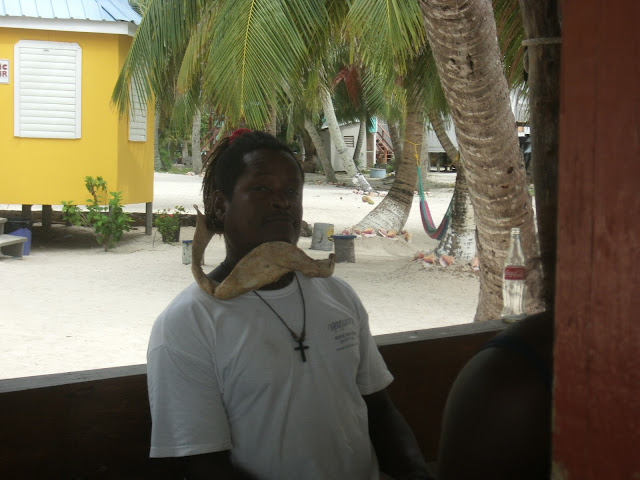 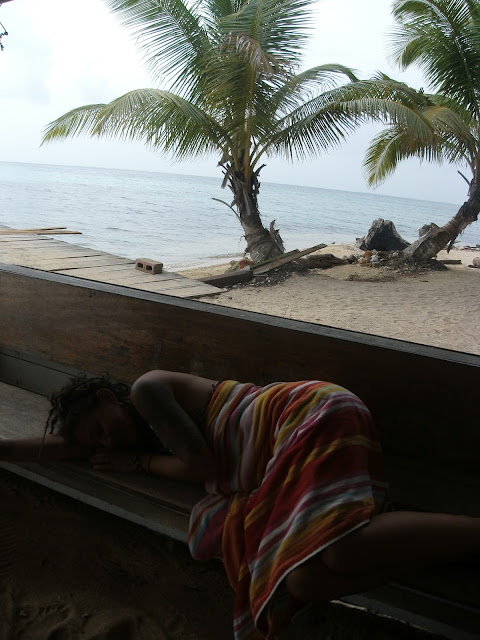 I have a million more pictures and some videos that I hope to be able to upload soon - but for now I'm siging off so I can use the rest of my 70% battery life to watch a movie before bedtime.