I've been noticing these signs on the buses and in the post office lately: 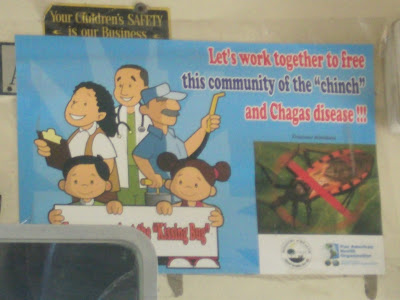 I finally looked it up - chinch and chagas... are you ready for this?

"A life-threatening parasite transmitted by a biting beetle can cause a person's heart and intestines to swell and burst — but early symptoms are hard to detect.... It's being dubbed the "new AIDS of the Americas."

So, this gross little beetle hangs out and feasts on your face while you sleep - usually near your lips, so they call it the "kissing bug" - and then it poops on you. You scratch the itch while you're sleeping, smearing the feces into the wound, and end up infected.

Here are a few Q&A's from YahooNews :

What are the symptoms?
The parasite has a long incubation period similar to HIV/AIDS, causing the disease to come in two phases: acute and severe. During the acute phase, victims can experience fever, general sickness, or swelling in one eye. Afterwards the disease goes into remission — sometimes for several years — until victims one day begin experiencing constipation and digestive problems. This is the severe stage,  and eventually causes a quarter of the Chagas disease sufferers to develop enlarged hearts or intestines, which can burst and cause sudden death.

Can it spread between humans?
Yes. The disease can spread human-to-human, especially through blood transfusions, if the blood isn't tested for the parasite.

Is Chagas disease curable?
If caught early enough, yes — though a typical treatment takes three months of harsh medication. The main problem, say researchers, is that the long incubation period makes symptoms difficult to detect. There's also a stigma attached that makes sufferers reluctant to seek medical help. It's commonly known in Latin America as "a disease of the poor," says Cassie Murdoch at Jezebel, "so there hasn't been much invested in finding new treatments." 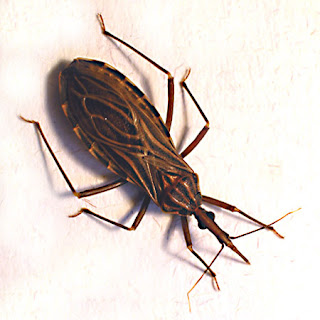 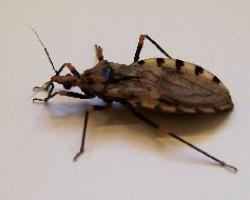