A Cat, Turtle, and Chicken Garden... and a closet!

The plans to build a little enclosed area for the cats had to be pushed back a couple of weeks since we ended up getting goats unexpectedly and had to take care of them first, but Don George, Richard, Loca and Jaime (pronounced Hi-mey) started working on it this week, and it's looking good! 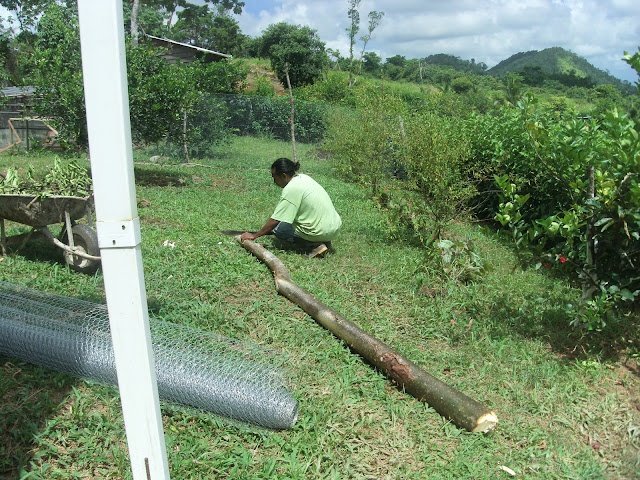 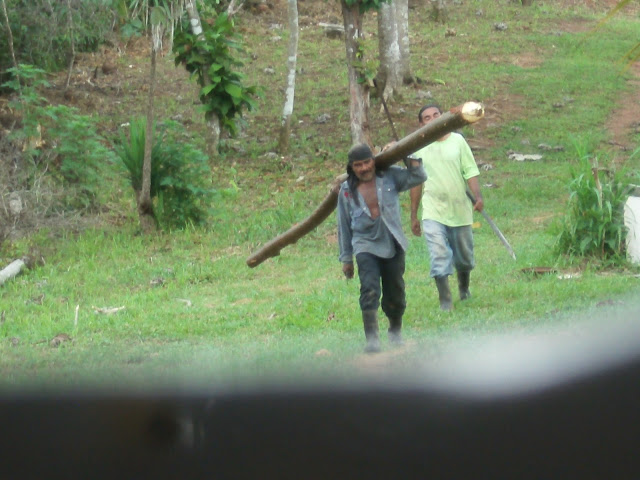 Don George - this 64 year old man can do five times more than any of the younger guys that work for us, and he's always smiling and laughing. I love him. 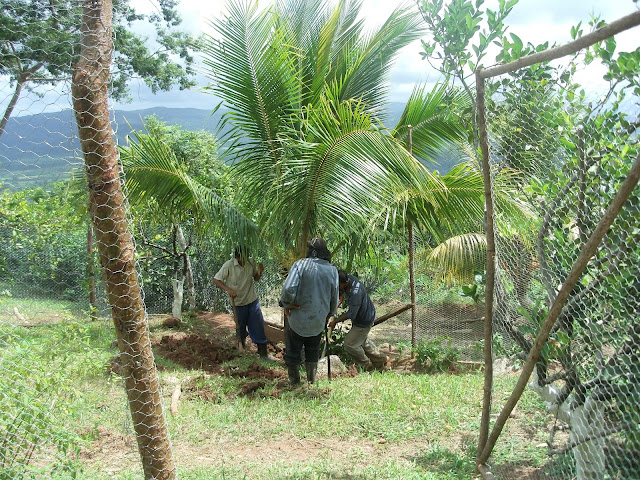 Months ago - maybe as far back as February, Robert and Bolo (I think) caught some big river turtle and brought it home. They were planning to eat it and make a drum out of it's shell, I guess, but I pouted and whined until Trip finally told them that we wanted to keep it.
Ever since then, it's been living in one of those 55 gallon drums under a tree, and I didn't think anyone ever took care of it - but I saw Don George, Jaime, and Loca all giving it a bath and cleaning out the drum the other day. It was cute, watching grown men wash a turtle.

I made it out too late to take a picture, but you can kind of see him here in the drum if you look closely 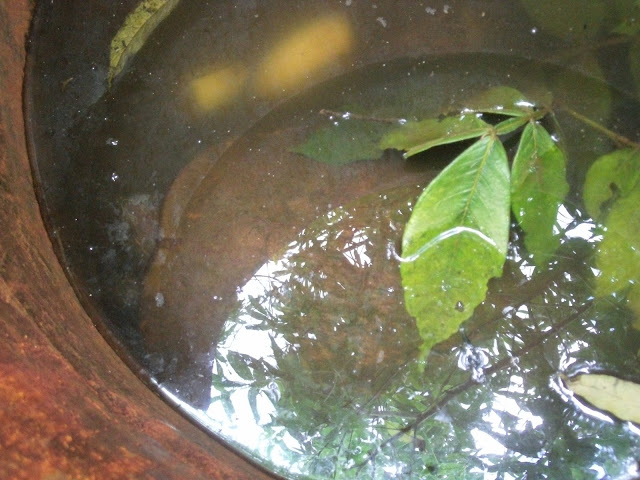 I've surprised myself by not naming him yet.

So, this little area back here will hold a small chicken coop for my gimpy Turkey, a pond (with waterfall feature) for the turtle, and provide a safe, outdoor area for the cats to romp around in - and eventually we'll spend time making it a nice little garden area with handmade, stick-built benches and pretty flowers and stuff like that. 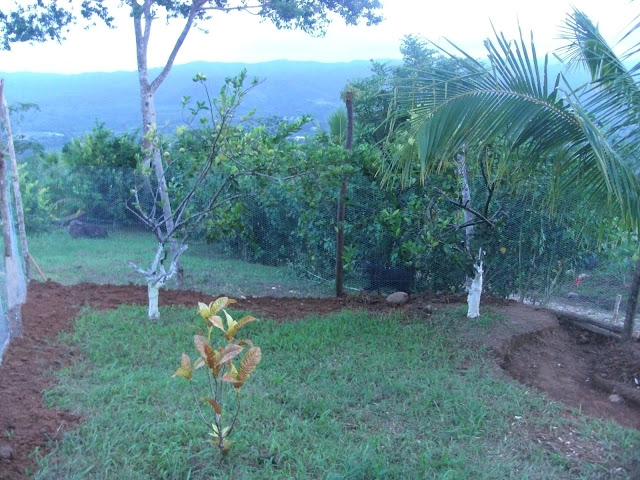 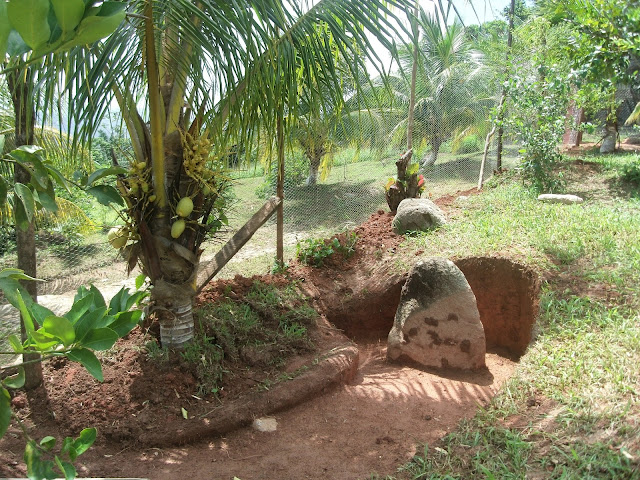 I love the natural rock the left in there 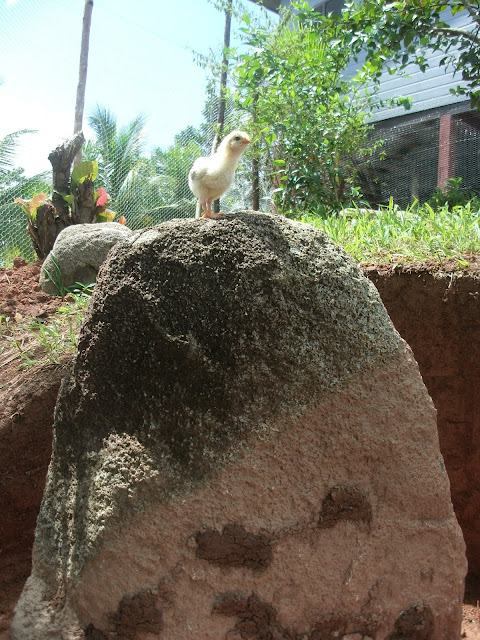 the first one to check out the Cat, Turtle, Chicken garden

Now all we have to do, in addition to building the chicken coop for Turkey, is drill a HOLE from the outside of the house to inside the bedroom and cut out a nice little cat door so Bubby and Muffin can come and go as they please. Construction in my bedroom again... booooo. 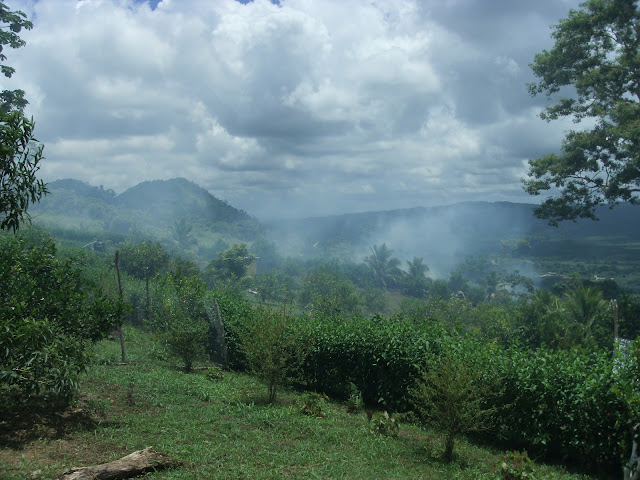 Clearing land - chop and then burn

Also this week, I was finally able to unpack my suitcases! I've been living out of bags since I moved here in February, and it felt SO GOOD to go through all of my things and be able to put them somewhere easier to get to, and it felt good to have a bag of all of the things I don't want anymore to bring over to Marley's house for her daughters to go through. 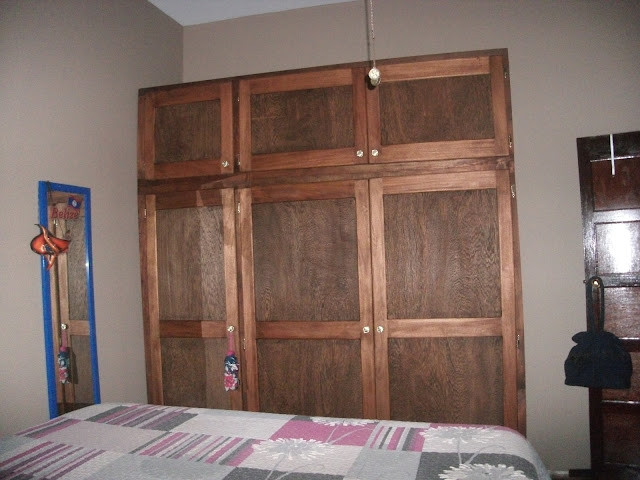 It still needs to be stained and varnished, and I'd like to add one more shelf - but... I have a closet!!
Man, it really IS the small things in life that bring you the most happiness... 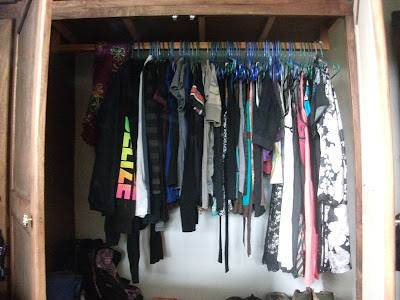 One thing you have to keep in mind if you're thinking of moving to Belize, or anywhere tropical, I suppose, is that things get moldy here if you don't use them regularly.
We went through a bag of shoes that Trip had boxed up and had to spray them all down with lysol and let them dry out in the sun, and I had some bags and belts with leather straps that got totally moldy and gross and ended up throwing some of them away because it was so bad.

I try to remember to air out the extra blankets and sheets and things like that once in a while to prevent that from happening, but sometimes I'm too late.