This past week has been pretty crazy - between picking up the slack on the farm after losing two employees to gunshot wounds, not getting much sleep, worrying about everyone, and a busy day out and about yesterday - I needed a morning to sleep in.

I didn't sleep the whole time, thanks to barking dogs, squawking  birds and the weed wacker, but I stayed in bed until about 10:30 this morning, and it was beautiful!
(Anyone that knows me knows that I have never in my entire life been a "morning person." I'm the kind of person that stays up until 5am and sleeps until noon... when I don't live on a farm.)

On Monday afternoon I took a bus to Belmopan and went to the waffle place again (Casa Cafe, in Doing this for the distraction)
This time I tried the Mr. Black Monkey and a mochachino: 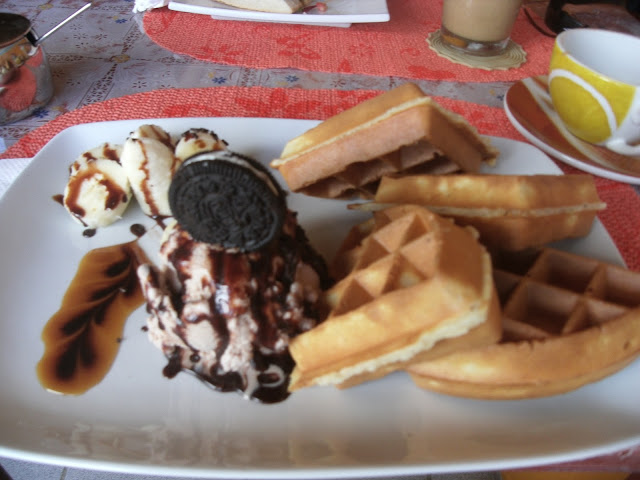 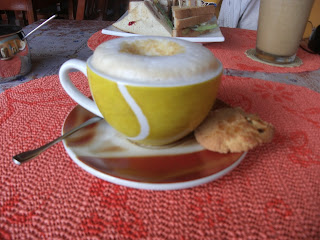 I love the little ball & court coffee mugs and saucers

Bob met me there again and highly recommends the Ham and Egg sandwich, if you aren't in the mood for waffles: 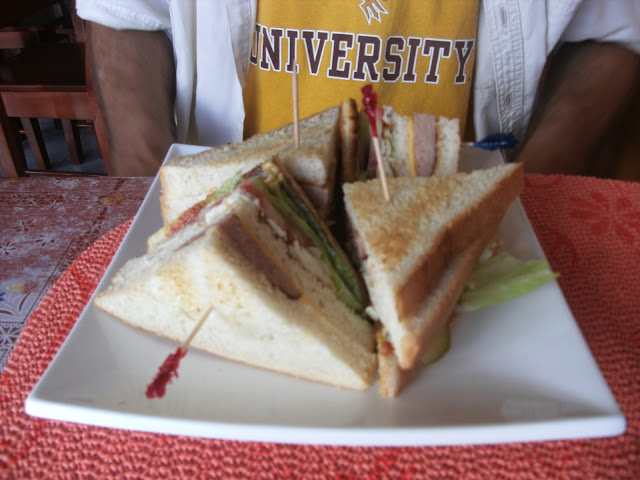 The rest of Monday was pretty uneventful - we walked back to Bob's and just watched tv all night, ordered pizza from Pepper's, and then I eventually crashed out on his couch a few hours after he went to his room.

Tuesday (yesterday... geez, it seems like it was longer) started around 5:30 when Bob came out to start making coffee. It took me until a little after 7 to be fully awake enough to leave and start my day, and I still felt like I was half asleep.
I walked to the bank, only to realize that I couldn't get any money out, so left town without getting anything done there.

I caught the 8:30 bus heading to Punta Gorda and took the almost 2 hour ride to Dangriga.
8:30 is apparently a great time to catch the bus - I had my seat to myself for the entire ride and was able to take a few quick naps since I wasn't worried about falling asleep and drooling on the person next to me. (That's happened to me before, on a plane. Highly embarrassing)

I went to the post office and collected my small stash of postcards: 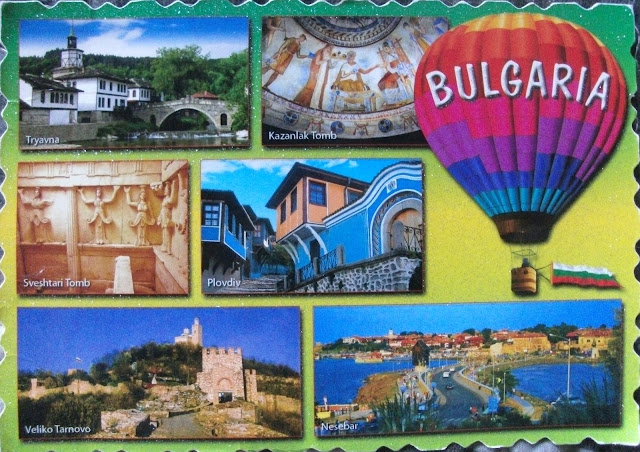 From Irina in Bulgaria. Every postcard I get from here makes me want to visit.... 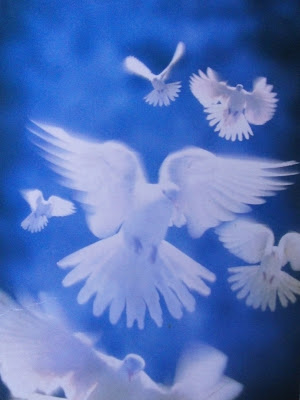 From Alison in Great Brittain.
I'm not sure what, if anything, these birds have to do with GB.... but they're pretty. 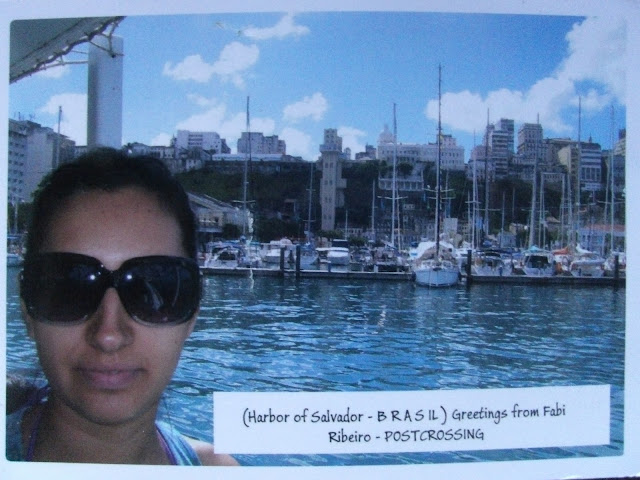 From Fabi in Brasil @ the Harbor of Salvador 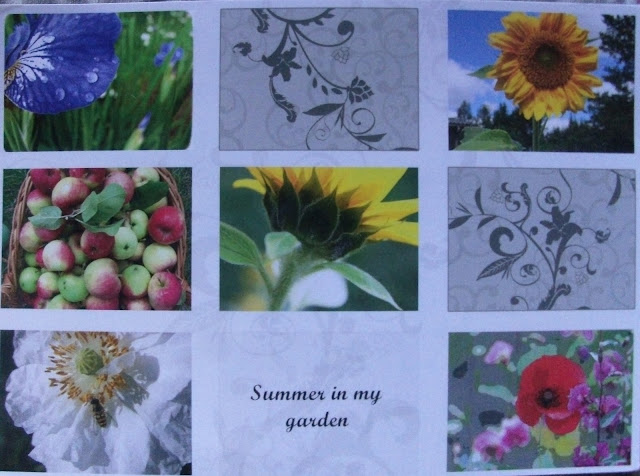 From Merja in Finland - pictures from her garden 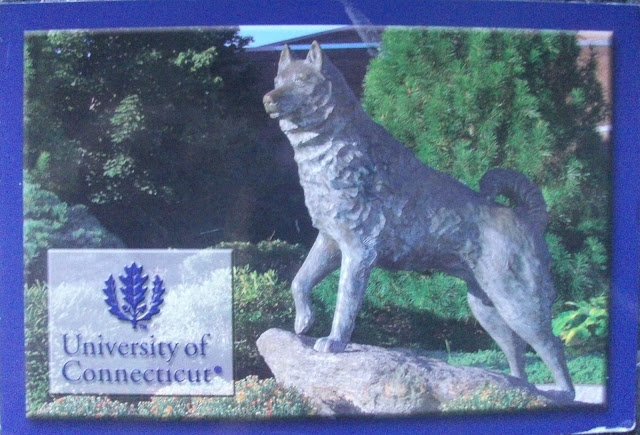 And from Tina, a third year PhD student at UConn

I ended up walking back along the coast towards the bus terminal and thought the water looked unusually calm... 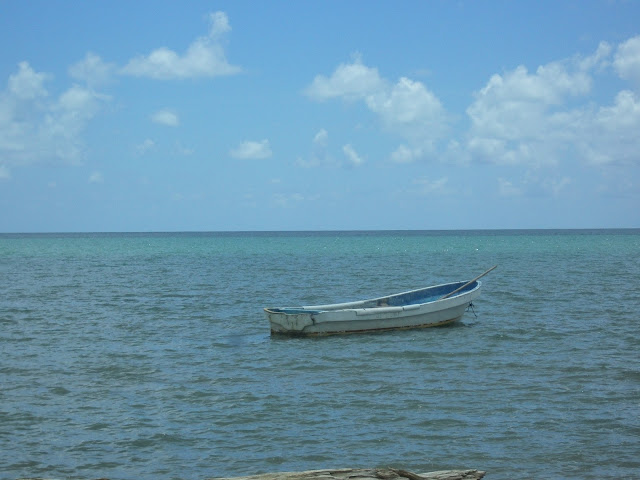 Hardly any waves... I considered walking out to this boat and paddling away, but my common sense told me that I'd probably start getting sick from dehydration before I made it to the Cayes.
I'm not prepared for long distance canoeing... yet. 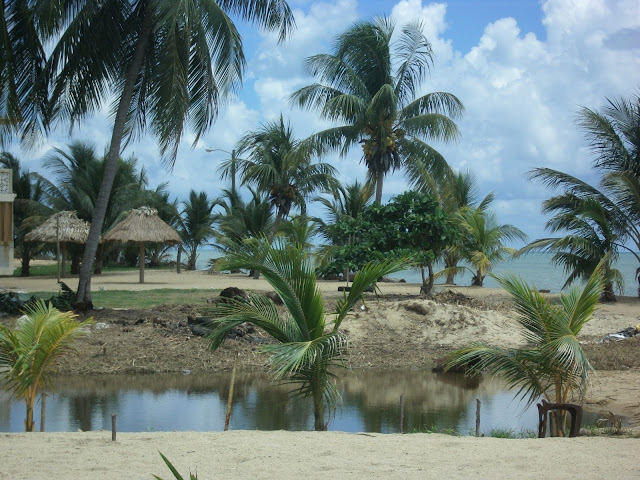 The river, the sea, some palapa huts on the beach at Pal's Guest House 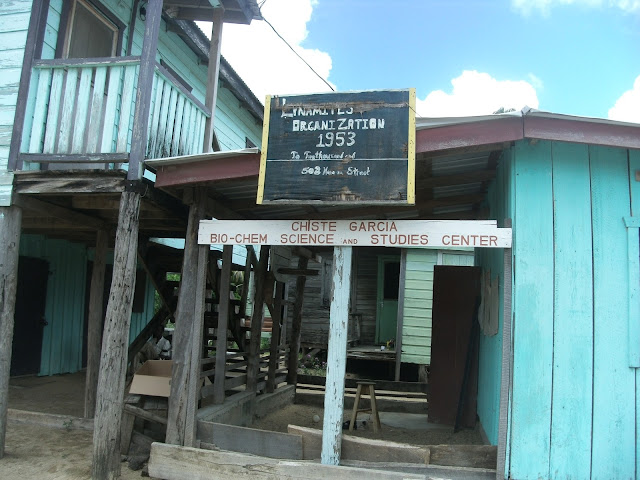 A building I wonder about constantly - Bio-Chem Science and Studies Center?
I might have to start asking some questions...

I was lucky, again, to catch another almost-empty bus and took it to Steadfast, the village just past Alta Vista, where I live, and had lunch at Cafe Casita de Amor. Yes, I've mentioned this place at least ten times already - it's the only place even semi-close to me to sit down and have a decent meal and some coffee or a milkshake. 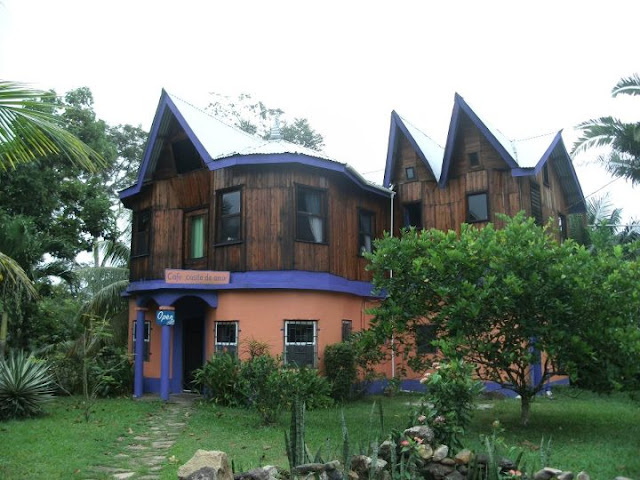 Mile 16 or so on the Hummingbird Highway. You can't miss it. 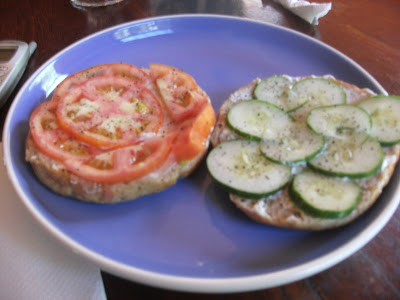 Homemade bagel with Philly Cream Cheese, tomato, and cucumber
I was so, SO happy that I didn't have to walk home after that - Trip came to pick me up and we went to Pomona to buy some beer, ice, and meat, and then made our way up the driveway without breaking anything! It's always such an accomplishment to make it up here without causing any major damage to the truck.
We were expecting Robert to finally come home last night, but he had to spend the night in Belize City to take care of some things.

The last we heard about last Thursday night's shooting incident is that Bolo is still breathing and still has a 50/50 chance of surviving his injury.

This morning, Robert and Bolo's two brothers were supposed to meet with a lawyer (in BZ City) and go to the Internal Affairs department in Belmopan to file an official complaint about the cop that started shooting unarmed people. We're still waiting to hear from him to see how it went.

HERE is a link to the story published by the Amandala newspaper yesterday - Police vs Castellanos family - one-sided, cops only version of the story that is complete bullshit.

18 family members wielding bottles? Lie. Flat out lie.
Robert was aggressive? Lie - Robert was inside the house and only stepped out to drag Bolo in after he had been shot. The cop saw Robert helping Bolo and shot him in the knee.
They searched the house - WHY? Because of the alleged drunk driving, or because of having a legal amount of money in his pocket??

The cops LEFT while everyone was lying around bleeding, went to the station to report what happened, and then came back AFTER being instructed to offer assistance getting to the hospital.
Bolo's mom refused to let them take her THREE sons, that they had just shot, anywhere, fearing that they would end up killing Bolo.

I'll let you know what happens when we hear from Robert.
Everyone's court case is set for November 7.