Every now and then I have a small revelation when I see something happening on the farm and I think, "Oh, that's what that means!"


Let sleeping dogs lie
It means - Don't instigate trouble; leave something along if it might cause trouble.

Here on the farm it means, "Don't open the door after dark because the dogs will wake up and start barking like lunatics." 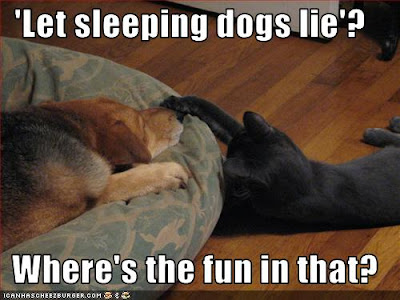 Flew the Coop
It means - To escape, to get away, or to get out

Here on the farm it means, "Another damn chicken got out of the coop, and now someone has to go grab it before the dogs start chasing it"

Don't count your chickens before they're hatched
It means - Don't assume you will get something; wait until you actually have it to claim it.


Here on the farm.... it's simply a true statement and good advice.
Just because the chicken is sitting on 12 eggs doesn't mean we'll be welcoming 12 new baby chicks on the farm - some just don't make it. 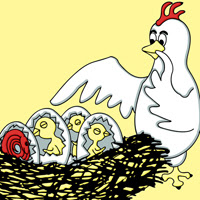 All bark and no bite
It means - someone acts threatening or aggressive, but is unwilling to engage in a physical confrontation


Here on the farms it means, "Don't worry about Mama, Clem, and Lopey, they're loud, but they won't hurt you if you're invited here."

"Man who believes and acts like he has the largest penis in a geographic area, and therefore, feels he rules over other men by size and can claim all the pussies in that area. Area can be defined as something as small as a party, niteclub, campus or town or larger geographic area over which the Biggest Dick in the Box feels he can preside."

Here on the farm it means... pretty much just that. The roosters will just jump on any hen they want, and they'll fight each other over one particular hen if they feel like they have to prove their dominance. 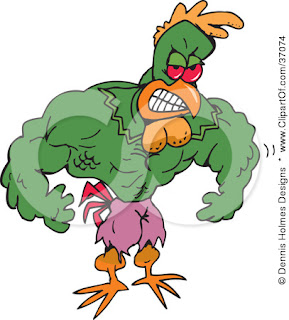 Side note -
Chickens are pretty ruthless, I'm learning.
There's constant "chicken rape" and for some odd reason, a few days ago, all of the chickens pecked another one in the head until it died. Maniacs.