Changes coming to the bus system?

It's been on the news a lot lately that there's going to be some changes coming to the bus system here in Belize - and I know a lot of people will be happy when they start to take effect.

Prices have already gone up Bus fare Belize City - Belmopan up by $1 and I noticed this new sign in the Belmopan terminal today: 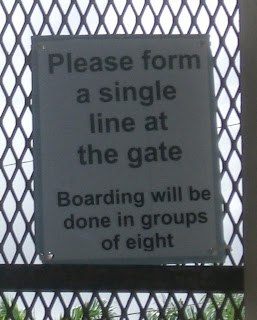 There wasn't anyone around enforcing this new rule... but I did notice a lot less pushing and shoving as we got on the bus today. I wouldn't say there was an actual "line formed," but people weren't rushing through the gate and then crowding around the door of the bus like animals.

I also noticed that Shaw's Bus Service is using one of the ticket booths - which has been used as storage for at least as long as I've been riding the buses here - to sell boarding passes, and they won't let you on unless you buy one there in the terminal.
Whether or not they still pick people up along the highway, I don't know.

Bob told me that there are also new "bus police" who do random checks to make sure that there are no standing passengers, and they hand out fines to the driver, conductor, and passenger if someone gets busted without a seat.

The outside of the Belmopan bus terminal seems to be coming along nicely.... they're working on a new driveway and parking lot and they've added real sidewalks and drainage ditches so far: 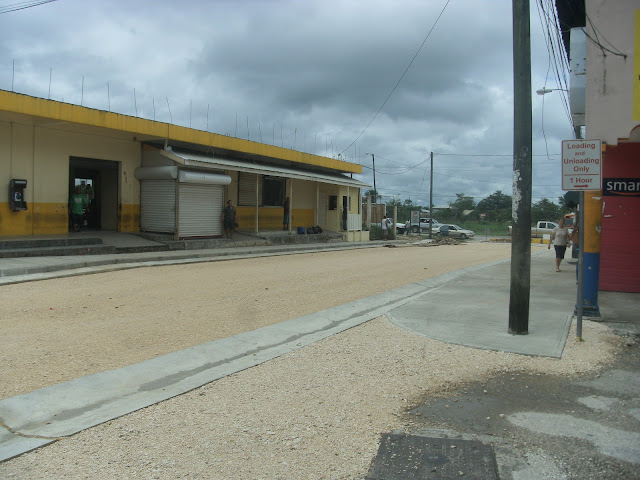 I know that Belize is "in debt" -
Super bond reprieve
Belize Negotiating Debt-Restructuring Proposal with Creditors
but there seems to be a lot of work being done all around country....

Now if we could just get more garbage cans and trash collectors.... that'd be great :)
Posted by Unknown at 9:21 PM