Requests for the People of Belize

I have two main complaints about the people here in Belize - and obviously not everyone behaves this way, but the majority do....

BE NICE TO YOUR ANIMALS!!!

I'm so sick of seeing dogs chained up in yards with no shade, or on a rope that's barely long enough for them to move.
I hate seeing dogs that are ALWAYS tied up, never allowed to run free.
I hate seeing dogs that should be big and beautiful...looking like they're going to starve to death. Same goes for horses.
I hate seeing dogs get beaten and kicked, I hate seeing little kids throw rocks at them, and I hate how everyone wants me to give them one of MY dogs.
I KNOW my dogs are pretty, because I take care of them!! I give them food and water, I talk to them and pet them, I give them flea and tick medicine and I love them! If a Belizean took my dog, it would look like a totally different animal in two months. It would be skinny, mangy, and unhappy.

I also know that most of you don't consider animals to be "pets," but this country would be a lot nicer if you did.

Mahatma Gandhi may have said it best... 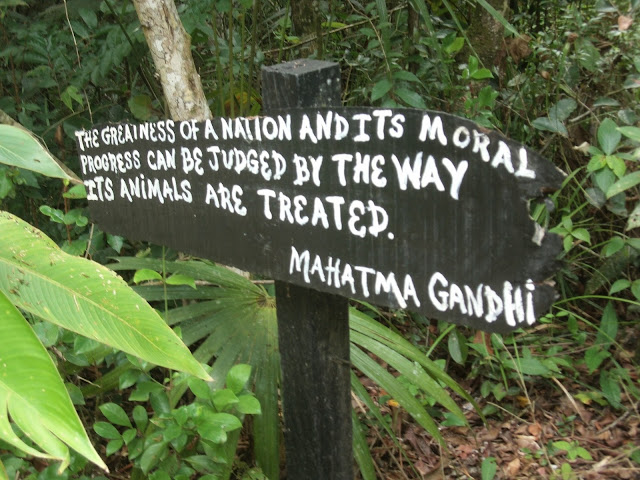 My second request is that you PLEASE STOP LITTERING

Do you know why more tourists don't return to Belize? It's because of the garbage!! You have no idea how many times I've heard - "Costa Rica is just like Belize, but MUCH cleaner."

This is what the bus stop in Alta Vista village looks like right now: 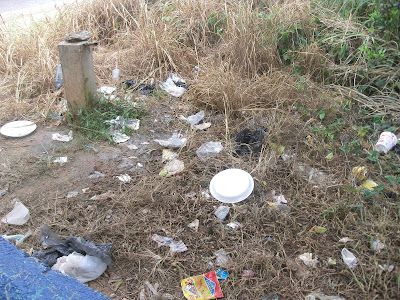 I have had people tell me, "It doesn't matter if we throw it in a garbage can, the dogs will just knock it over and make a mess."

Ok - first of all, feed your dogs and they won't be so hungry that they have to tear into dirty diapers and used condoms and whatever else is in there.
Second - how hard would it be to build a little wooden structure with a top you throw over it to keep dogs out of the garbage??

Ug. Come on, people.... be nice to animals and keep the country clean - those are my requests to you.

And I hope no one gets all "Go back to where you came from if you don't like it," about this, because I would never ask any Belizean to do anything that I wouldn't be willing to do myself. (excpet kill a bug or something gross)

I feed the scrawny dogs (when I can afford to) and I pick ticks off of them and give them love and attention, and I'm constantly picking up garbage.... so... there.
Posted by Unknown at 8:52 AM