I don't know if my expectations for a yoga retreat were way off or what... but I was definitely hoping for a little more yoga than we did at the one I just went to. Maybe even some meditation or discussions about different postures and practices, or some breathing exercises of some sort.

Maybe something a little more like this 5 day retreat in Kohphangan in Thailand, which includes; 10 yoga classes (5 Ashtanga Mysore Style, 5 Hatha Flow); Daily lectures on theory and philosophy; and an Herbal Steam on Sunday, Wednesday and Fridays. "This unique course covers the basic elements of yoga, including the eight limbs of yoga, philosophy, postures and alignment."
I even heard, recently, about a retreat in Virginia that offers an hour long workshop on the importance of hugging...

I was thinking, too, that the other guests would be more into yoga, but no one seemed that into it, and a few of them didn't participate in the classes at all.
There were also a couple of people around who, I felt, had too much negative, frenetic energy to be hanging around at a yoga retreat where some people had come to "chill out, do yoga, and have peace." (That was my intention for being there, anyway...)

I don't think a "Yoga Retreat" was the proper name for what took place... it should have just been called a "Fun, Fancy, Belize Vacation..... with the option to do some yoga."

There were a few really nice aspects of the retreat, however - one of them being the food!!

The dinners were just as delicious as the breakfast and snacks each day... maybe even better, if that's possible: Fresh Grouper with snow peas and a mix of organic red & white quinoas, with sauteed portobella mushrooms, onions & tarragon; An authentic Jamaican dish prepared by Robin (of Robin's Kitchen in San Pedro) that I actually missed out on, but I heard was fantastic; and this phenomenal, Thai inspired Lobster and Shrimp Tempora with an orange ginger sauce, coconut rice, and sauteed kale...

Chef Bruce and his lovely wife/assistant did a great job at keeping us fed - and they even served desserts! Pineapple Rum Cupcakes; Bananas Foster with an organic, brown sugar sauce; and what was possibly the best Key Lime Pie with homemade whipped cream and Graham Cracker crust that I've ever tried.. 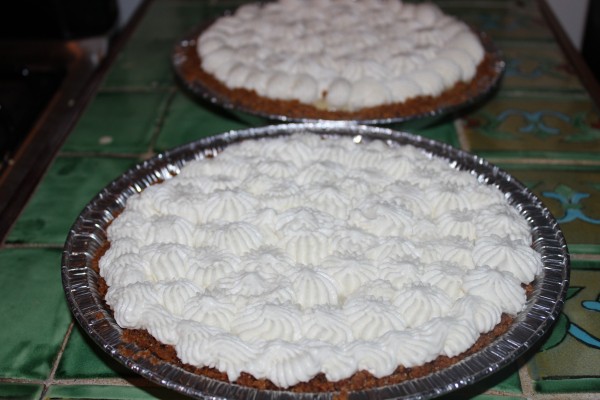 Here's a picture of Bruce and Jane enjoying a night off on the Sunset Catamaran Cruise... 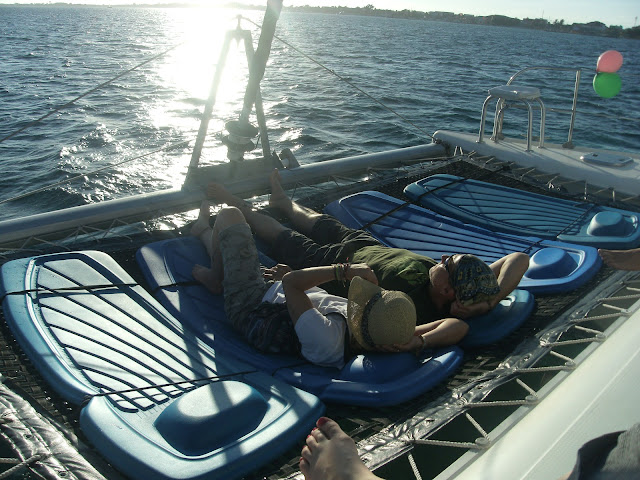 Speaking of the Sunset Catamaran Cruise - that was pretty sweet, too.

I had planned on staying in the villa by myself on the night of the cruise so I could get some of my classwork done and enjoy some alone time... plus, I live here... so I've been on enough of them to know that they're *pretty much* the same thing every time.... but I'm glad that some of the girls convinced me to tag along. (And that's exactly what I did - tag along - so I owe everyone a big thank you for allowing me to do that.)

Here's the Lady Leslie, the 40 foot catamaran, all decked out for a birthday party for one of the guests of the retreat.. 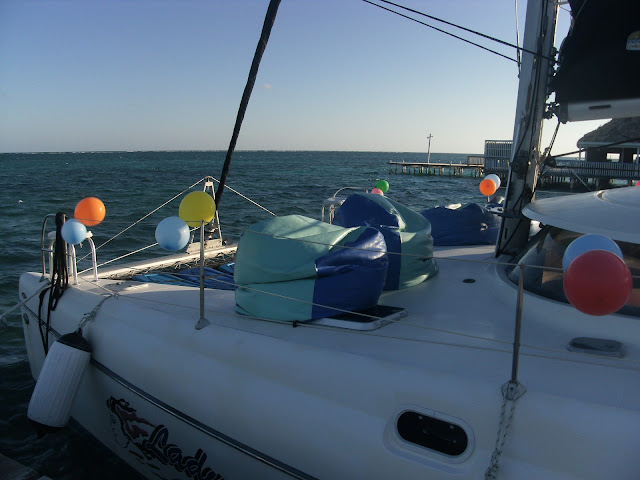 We were served beer, Rum Punch, and Panty Rippas, as well as even more food... Cream Cheese covered crackers, Pineapple Salsa with tortillas chips, and, my favorite... Lobster Sushi

Most nights in San Pedro end with a gorgeous sunset, and the night of the cruise was no exception.. 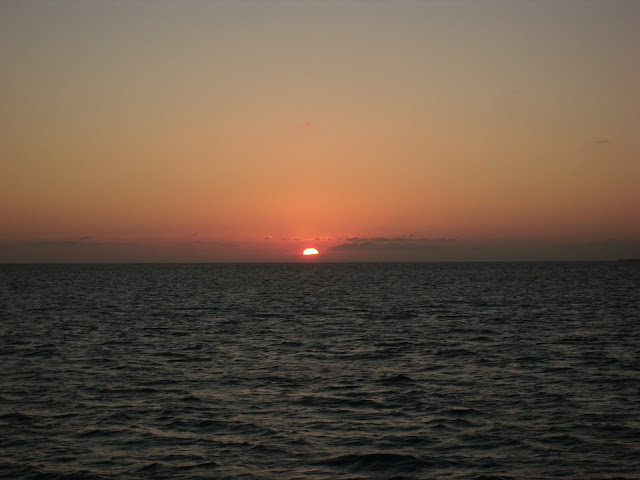 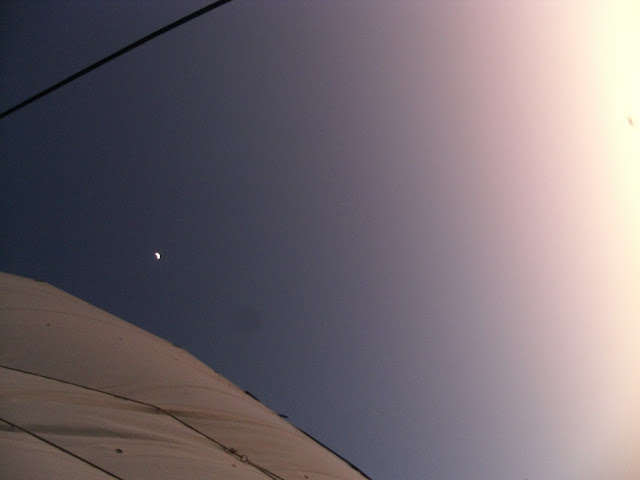 I think I'll tell you about my favorite part of the retreat in the next blog post... but don't worry, I'm wide awake and just might have it banged out for you before I go to bed tonight!
Posted by Unknown at 8:11 PM