Thanksgiving was almost two weeks ago, and, other than calling to say hello to my family when I knew they'd all be at my parents house for an amazingly delicious dinner, I pretty much let it go by unnoticed. I don't even think I said, "Happy Turkey Day!" or anything stupid on Facebook - but I DO have a lot to say thanks for, and I think it's time I acknowledge it - so, in no particular order... these are the things that I'm thankful for:

Getting to spend Thanksgiving with one of my best friends this year!!! 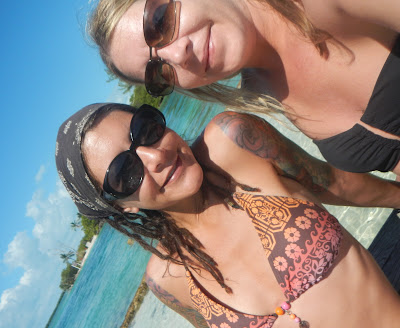 (thanks for the new underwear and shorts, too, Kat!)

Sunsets and Sunrises
Self explanatory, I think... but here's the visual that goes along with what I'm talking about: The Fam.
I'm very thankful that I still have both of my parents alive and healthy, and I'm super thankful that they're such great people that I can always count on to help me out if I find myself in an unpleasant situation... which does happen from time to time.
I would never win a "Daughter of the Year" award, but my parents would definitely kick your parents ass in a Best Parent competition.
I also have two older sisters and a "baby" brother (29 years old) who I know I can call or message whenever I want to and they'll catch me up on family gossip, make me laugh, and put me in a better mood without even realizing it.
My niece and nephew do the same thing - when I talk to them on the phone and hear how much older Gage sounds and how little and squeaky Shaye still sounds... ug - it isn't as great as being able to see them in person - but my heart get happier when I hear them, and for that, I'm thankful. 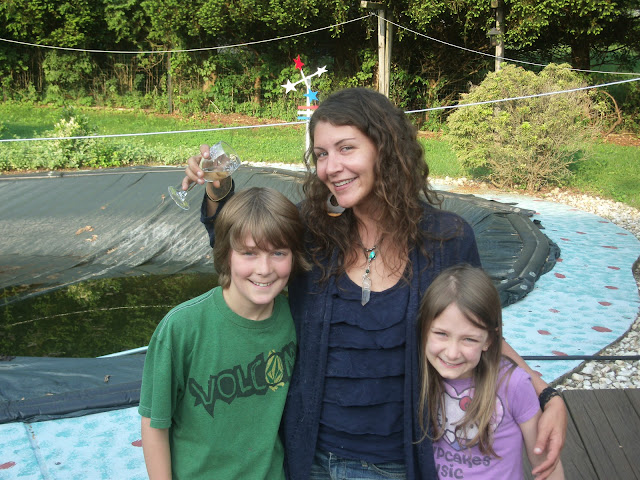 (Ummm - PA friends, I'm still missing that damn crochet jacket thingy that I have on in this picture and I WANT IT BACK.)

The Internet
I've mentioned before that I've found out that I can totally live without television and without a fancy phone and even without "normal" household electricity - as long as I'm able to keep my computer charged and can get online to message my friends, play Words With Friends with my parents, write my blog and work on my writing class, I'm pretty happy.... and I'm thankful for the internet because it makes all of that stuff possible.

Friends
This could be self-explanatory, but I think I have a different appreciation for good, true friends since I've left the US and moved down here. A move like that shows you who your true friends really are. It doesn't take much to keep in contact (thanks to the internet!) when someone moves away... and the people who can't be bothered to reply to an email, text, or message with a simple sentence or two have been scratched off my "friends" list and reduced to mere acquaintances. (Take THAT, you jerks!)

Realizing when something was "meant to happen"
It's been said that "everything happens for a reason," and that you "meet everyone you meet for a reason," and it's such a good feeling when you realize what that reason was.
It doesn't happen to me often... hardly ever, actually... but it did happen recently and I had a moment of, "Oooh, this is why I met and kept in contact with this person!!" It was like... something made sense in the world, and it was refreshing.

For Living in Belize
I'm not going to trash where I came from - but I will gush about how much more I love living in Belize, if you want me to.
Actually - I won't gush about it because I have other things to do, but I'll give you an example of why I prefer living here in Belize -
You meet people from all over the world. Literally.
I've met people from South Africa, Australia, Israel, Turkey, Greece, Italy, France, Spain, Brazil, Argentina, Chile, Tasmania, England, Poland, Croatia, China, Japan, Pakistan - I mean, seriously, people from ALL OVER THE WORLD. Name a country, I have probably met at least one of their citizens, and it's because I live in Belize that I've met these people.
I'm sure that's not as exciting for some people as it is for me... but where I grew up, it was somewhat unusual to see anyone who wasn't Caucasian. White, middle class Americans. Not a lot of diversity.... so meeting people from the rest of the world is just really, really cool to me.

For Trip
Before June, 2008, I had no idea what or where Belize was.
I'm sure I would have heard of it, eventually, on my own - my sisters friend has lived down here for 7 years or so, so I would've heard her mention it at some point, and now John McAfee is all over the news and bringing attention to Ambergris Caye, so I would've caught all of that - but it's because of Trip that I not only learned about Belize, but that I came here for the first time, and because of him that I'm now living down here.
There are a lot of things to be thankful for in the "Trip" category, but getting me to Belize is what I'm most thankful for this year - I really wouldn't be down here if it wasn't for him.

For "Guardian Humans"
Similar to "guardians angels," but in the human form. People who look out for you and pick you up when you're down... maybe you didn't even know they were there - but when you needed someone to get your back, they appeared. I've had a few appear in my life this year.. and will be forever thankful for all of them.

The Kindness of Strangers
Readers who donate to and support my blog, people who write just to say hello and make a new friend, people I've met only once or twice and have extended an invitation to spend the holidays with them and their families, people who offer kind words and encouragement, strangers who give me advice when i propose some kind of question... THANK YOU. Really.

New Beginnings
When shit doesn't go as planned and you find yourself starting over... it might be scarey, and it might even suck for a while, but you're still lucky to be alive and have another chance at a new beginning.

I'm sure I'll think of at least 10 more things to ad to my list as soon as I post this and sign off...
THANK YOU for reading :)