I got really sick while at work on Friday morning- like, reeeeally sick. I don't want to share the graffic details- but if you know the symptoms if a stomach flu then you can imagine what I was going through.
And like I said, I was at work, on a boat.
It was rough.
Long story short- I ended up coming home to deal with my illness a little more comfortably (and away from the guests) and spent the rest of the day alternating between cycles of sleeping and getting sick.
Eventually, after going through it for about 15 hours, I had to get some food in me and I thought I was feeling good enough to walk into town to find something. (Business idea for someone- we need more food options in the Boca del Rio area. All we have is fast, fried food, Chinese food, and a bakery that doesn't sell coffee!!!)
Anyway... I did manage to walk to town, but as soon as I got to Front Street I started feeling nauseous again and had to sit down on the steps of the bank across from the Catholic Church.
One of my local buddies, Jay, saw me sitting there and came over to check in me, but he talks too much sometimes and his suggestions about how to feel better ("you just need a back rub and my penis," that sort of thing) weren't entertaining me at all, so I told him to go find someone else to bother before he made me throw up.
After a few more minutes by myself, I decided to try to keep going.
I only made it about 30 more steps before I started getting hot and dizzy, so I had to sit down again, immediately. There were no more steps to sit on and I really didn't think I could make it over to one of the benches in the park, so I just plopped right down on the side of the road and ripped my hoodie off and tried to cool down and get my shit together.
I must've been sitting there for a good ten minutes before I even realized that the enormous Christmas tree was up in the park.... literally right in front of me. 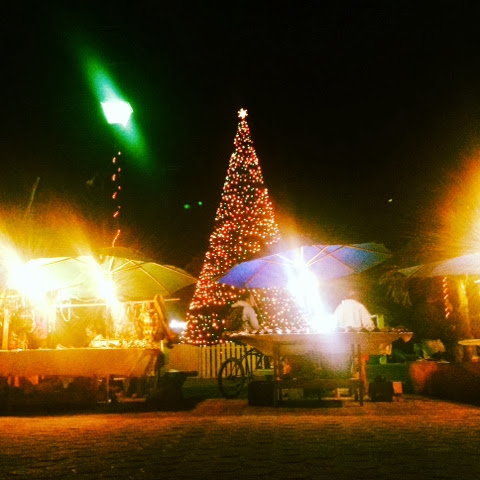 Another (old) friend of mine, who had been riding by on his bike, saw me sitting there and stopped to check on me, and after he left, one of the female vendors from the park came over to see what my deal was.
I told her that I just wasn't feeling well and had to sit and chill for a minute, and she offered to help me over to her table and let me sit in her chair. Then two more vendors came over to find out what was going on and offered their assistance, too.
I assured them that I was feeling much better (I wasn't) and got up and started walking again. Luckily, I didn't have to go far before I saw Rasta Robin sitting outside of the old post office.
I sat and joined him and told him that I wasn't feeling well, and he suggested that we go over to Luna Loca to see if Miss Brandy had any soup that I could sip on.
She wasn't there, unfortunately, but "my" spot on the comfy couch was open, so I was able to sit there for a while instead of out on the street and just relax for a bit.
Robin told me he was going to go get some Savila to heal me with, and he came back a few minutes later with a big aloe leaf. (He told me that the Spanish word for aloe, "savila," means "Savior." I couldn't find proof of that anywhere, but I still believe him for some reason- maybe because I know that aloe vera is known to have healing properties)
He crushed it up in his hand and then rubbed the juice on my forehead and told me it would help with my fever and stomach problems (not cramps, though, which I also had, because I was just that lucky)
I'd say about five minutes after he put it on me, I could literally feel my body temperature drop. I stopped sweating and actually had to put my hoodie back on, and I felt good enough to get up and go find some food to bring home.
Robin walked with me back out to Front street and I stopped to look at the menu for Bella Italia.... I told Robin that I only wanted soup but they didn't have any- so he introduced me to the owner, told him I wasn't feeling well and that I wanted soup, and the guy actually went back to his kitchen and made some for me. (It was really good, too!) He even gave me a Tupperware container and a real spoon to take home since they don't stock take-out containers for items that aren't on the menu.
I took a taxi home, which was a good idea because I started feeling sick again not long after paying for my food, and spent the rest of the weekend at home, in bed, whining on Facebook about how badly I want to take a hot shower.
I keep the door to my room cracked open a bit while I'm awake in case the cats want to come visit (they live outside here and need a good family, if anyone is looking) and one of my neighbors came to check on me since he noticed the door open but hadn't seen me at all. He even offered to go to the store for me if I needed anything....
It's just really nice to be reminded sometimes of how many good people live here on the island- people who will check on you and watch out for you and make sure you're ok, even if they don't know who you are.
Posted by Unknown at 8:03 AM