A frequent question about living on the #1 Island in the World is...

Yeah.... that's what all the single people itching to move down here want to know, and all I can tell you is.... it's rough. Even if you're open to dating outside of your own race and are willing to consider locals as well as other ex-pats... it's rough. Doesn't matter if you're straight or gay - same deal.

Sex is easy to find (ask me about rent-a-rasta)- like way too easy - but relationships? Totally different story.

To address the women, first - I obviously don't know every single person on this island (I actually know a shockingly small amount of people since I don't go out much) but I've talked to other single females who are living down here and we all agree that there is a total shortage of good, honorable, respectful men here in San Pedro.
What we see are guys in their 30's, 40's, 50's dating local girls in their teens or early twenties. (expats)
We have married men hitting on us even though they know we know their wives. (expats and locals)
We see totally sexy tourists... but we know they'll be gone in a week.
We get called "beautiful," and "lovely," and "princess," by the local guys... and then we hear them saying the same thing to the next 80 girls that walk past them. (a pet peeve of mine)
We see the recently divorced, 40-something year old men partying all night and trying to be a part of the 20-something year old crew and making questionable decisions about who they sleep with. (expats)
We see the guys who sleep with tourists and are perfectly cool with not making any commitments. (expats and locals)
We see a lot of alcoholics. (expats and locals)
I, personally, have seen a married man go home with a hooker. (expat)

Guys - I can't help you out as much here. I think it's safe to say that if you're an older man and you end up with some cute, young, local girl - there's a big fat chance that your money is the most attractive thing about you to her.
I know plenty of guys - plenty - who have dated a young Belizean woman and was then expected to help take care of her, and her family. One guy that I knew fairly well became responsible for paying for his girlfriends two younger siblings to finish school, and for giving the family money when they needed it. (The girl eventually cheated on him with a local boy, closer to her own age, and ended up getting pregnant... so they're no longer together)

On the other hand - I know plenty of local girls who don't need someone else's money and who seem to be perfectly lovely wives or girlfriends - so you just have to know what you're getting yourself into.

As far as dating one of us single, ex-pat ladies... I guess you'd just have to show up, stay for a while, not get a shitty reputation (it's an island, we'll know everything you do at night by the next afternoon) and start going to wherever it is that all the gringos hang out to see who you meet. (Not me.)

Some places ex-pats might go to meet other ex-pats:
That's really all I know of.... as I've said, I rarely go out and I'm not looking to meet someone to date.

If you're already in a relationship and you're thinking about moving down here, I'll give you the same warning that I received when I moved here as a married woman -
"It's totally common for marriages to end once you move here and your husband starts messing around with a younger local girl." (Not what happened to my marriage but it does seem to happen quite a bit)

There's no Belize Craiglist, there's no Belizsesingles.com, there aren't any dating services, and who wants to try to start a relationship in a crowded bar full of mostly tourists?

If you have a story about meeting someone perfect for you while living here, or if you have any advice for people looking to date down here - feel free to share it in the comments.

Or, instead of getting into a relationship with another human, why don't you move down here and adopt one of my adorable kittens.... 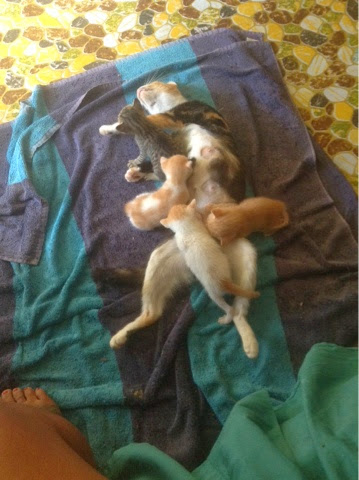