A few new Firsts for me on Ambergris Caye

I've been BORED and lazy since I've been off from work for so long.
Actually - I really shouldn't use the word "bored," because I'm totally content with just hanging out by myself and not having any commitments or plans - I've always been one of those people who values their free time - but I guess I've been feeling a little cabin fever-y since I haven't been going out much lately.

Anyway, whatever my problem is, it made me decide to get up and go for a walk yesterday, even though Luna wasn't around to take with me.
With no particular destination in mind, I just made my way to the beach and started heading north. 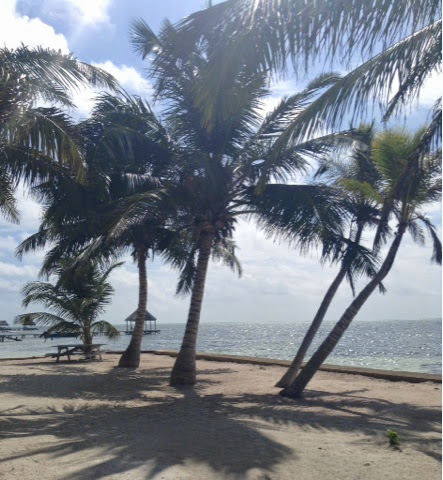 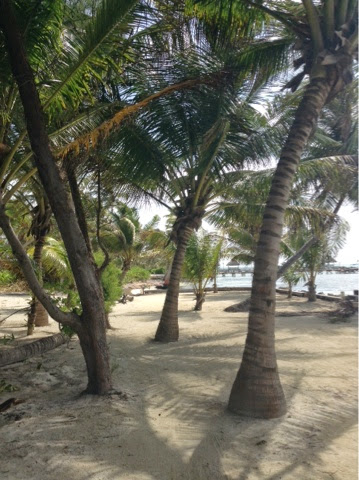 I walked past all of the familiar spots: Jolly Rogers, the Palapa Bar, AkBol - and then realized that, even though I've been pretty far north - just further than the northernmost resort on the island, Tranquility Bay - this was my first time walking any further than AkBol.
I generally take a golf cart or the Coastal Express water taxi to get anywhere up there - so it was, like, a whole new experience for me, especially once I passed Captain Morgan's (it took about an hour to get to that point, in case you're wondering) 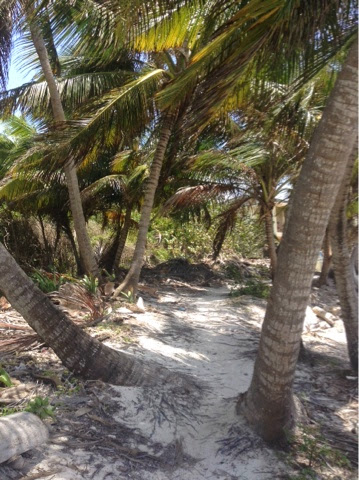 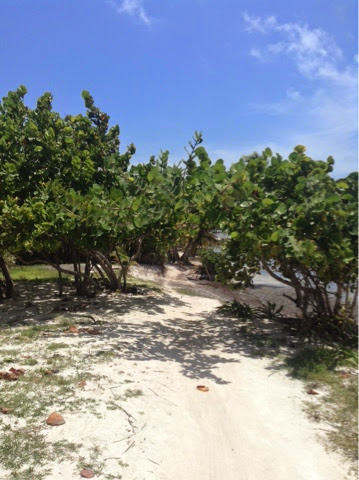 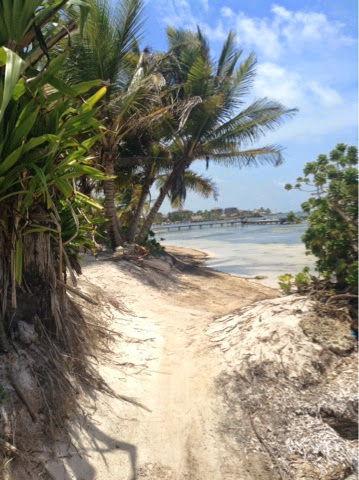 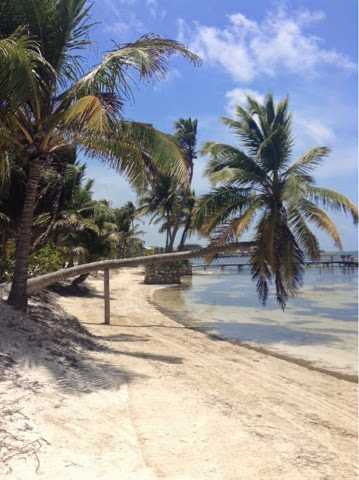 There are more private houses up there than I realized... If anyone wants to buy me this cute, little pink one, be my guest: 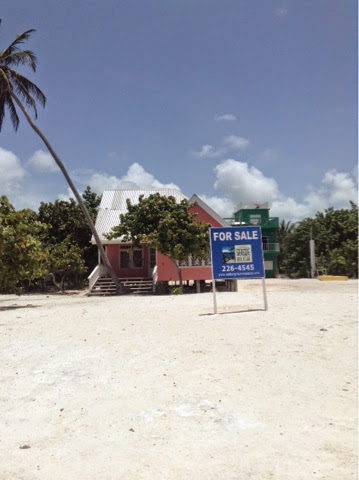 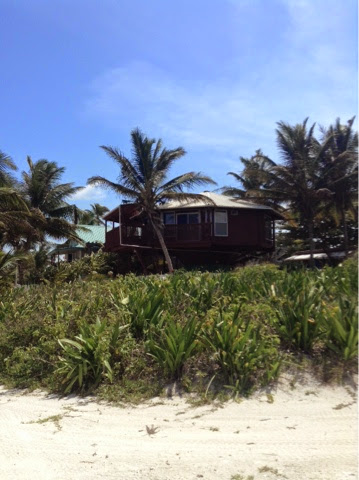 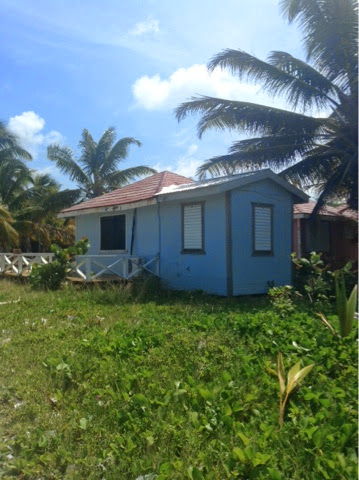 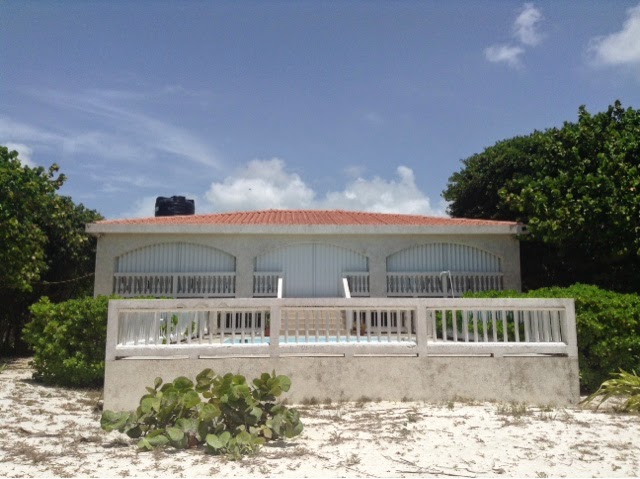 This one looks totally deserted - except for the full pool right in front. Weird.

As I was walking, some little girl started talking to me about my dreads and ended up tagging along with me for a while. It was her who told me a little bit about this interesting, old, resort-type place that we started to pass, and I had to go in to take a few pictures... 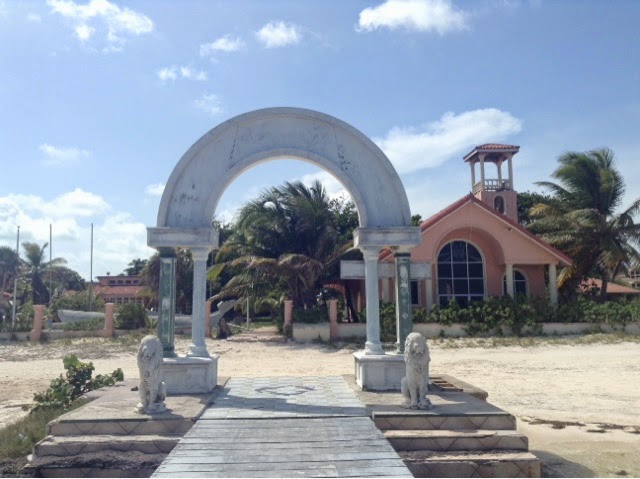 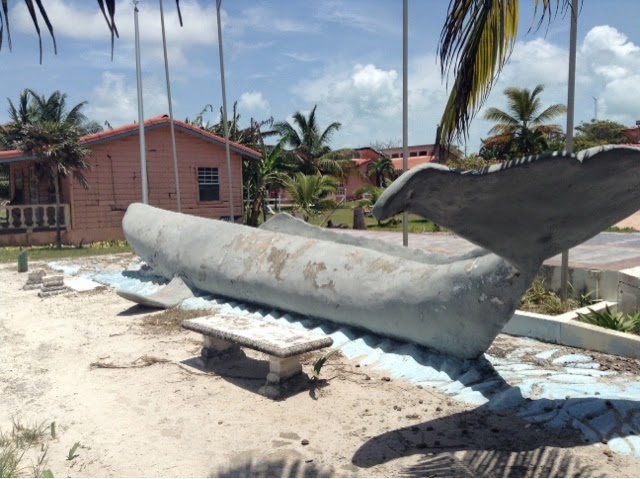 If you saw a big ass, cement whale inside a run down resort, you'd check it out, too, right?

So, according to this little girl who's name I forget, this place was in the process of being renovated and turned into a resort for sick people to come to, but after a hurricane came through and did some damage, the people stopped working on it. 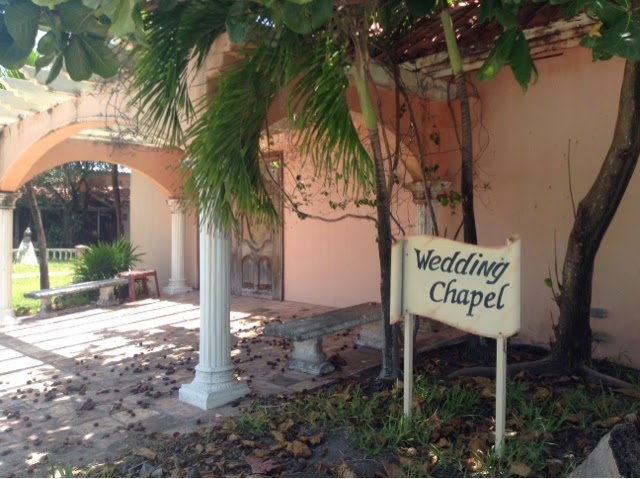 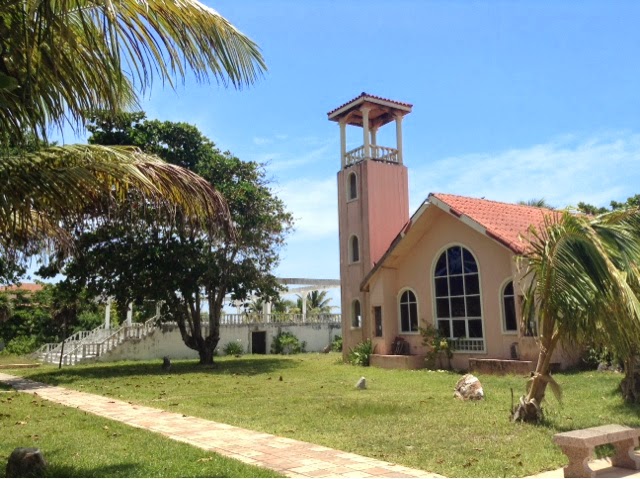 I googled it and found THIS LINK on AmbergrisCaye.com.. - other people have already done the research - check it out, it's pretty interesting. (And my new little friend was pretty accurate with the minimal amount of information that she gave me)

It's kind of like its own little local village now - people rent out the run down casitas and there are children running around all over the place.
I met a guy with a gorgeous pit bull who told me there are rumors of another company coming to take it over and turn it into a new resort, but he hasn't seen any proof of that happening any time soon.

My little friend and I kept going but, eventually, she bailed on me because she thought I was going too far and was annoyed that I didn't know exactly where I was heading. Whatevs, little girl.

Totally random addition to this post, and totally random on the island, I think - Did you know that this was going on at the old Journeys End resort? Ywamdp.org 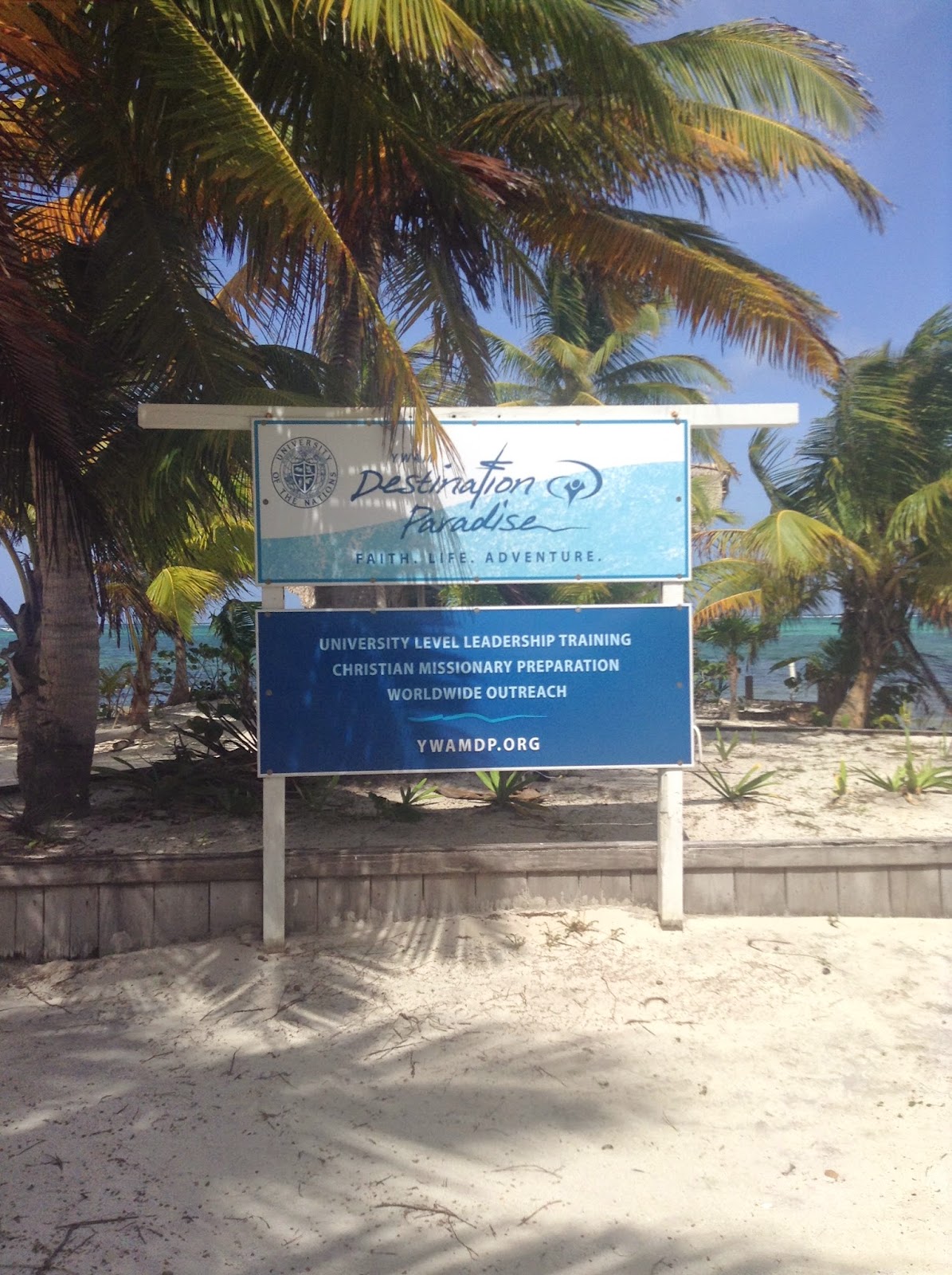 I finally stopped when I got to the bar at Ambergris Divers Resort - which is at mile 4.5 and, now I know, an hour and forty-five minute walk from my house at Reef Village.
After a bottle of water and three refreshing beers, I started making my way back home. 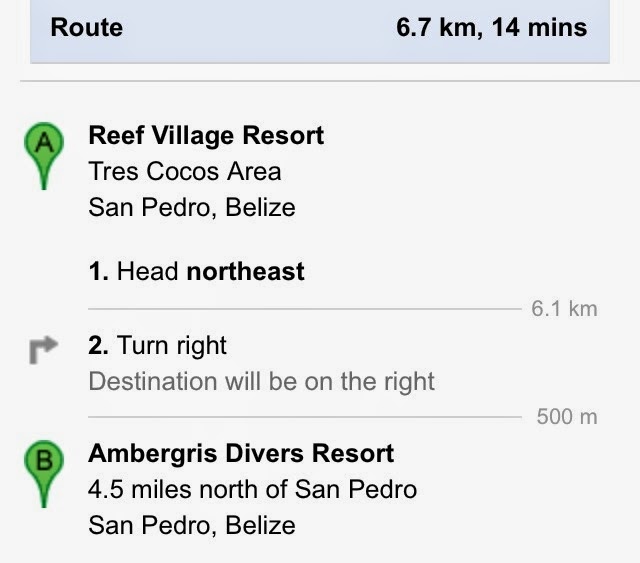 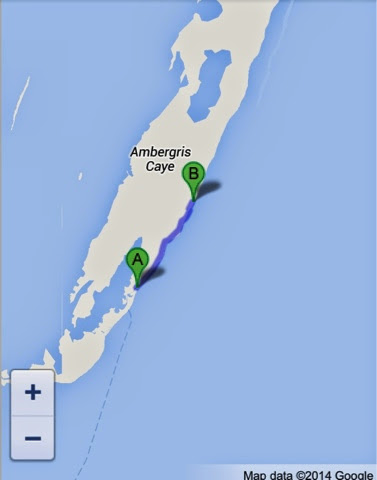 I met more people along the way - my new buddy Barney up at Indigo, and this guy - Gerald, who was taking a break from collecting garbage on the beach: 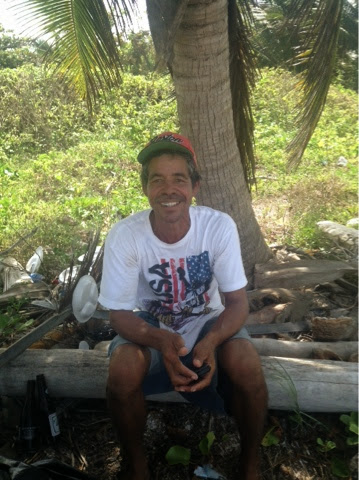 I sat with him for a while and ended up telling the man all kinds of things about my life that he probably had no interest in, but he listened and offered advice, anyway.

Once we parted ways, I decided that I needed to get out of the sun and rest my sore ankles, so I made my first stop ever at Capricorn and called my friend Ellen to come and have a drink with me. 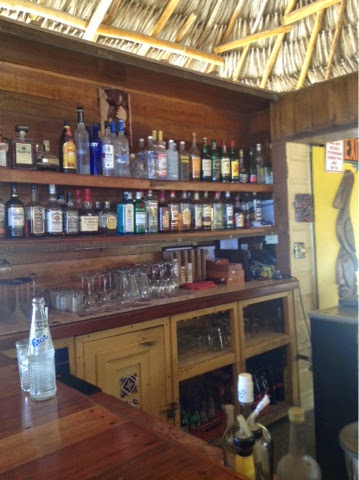 After a few more beers and a couple of shots of SoCo and lime, I went back to Ellen's and hung out with her and her boyfriend Mark for a bit. We decided to go hang out on his boat for a hot minute, and then they took me to a dock closer to home in his dinghy.

According to my pedometer, I walked over 10,000 steps yesterday.... Which is why, if you see me today or tomorrow, I may be limping or asking for piggy back rides.