So - first night in Managua, second and third nights at the Surfing Turtle, and then Gerson picks us up and takes us back to Managua after another quick stop in Leon. (That was my super quick recap from Nicaragua - Part 1)

We had a really good time with Gerson - he joined us for some roadies, bought us something in Leon (puff puff) let us stop for a pee break/roadie reload, and dropped us off for sushi when we reached Managua. 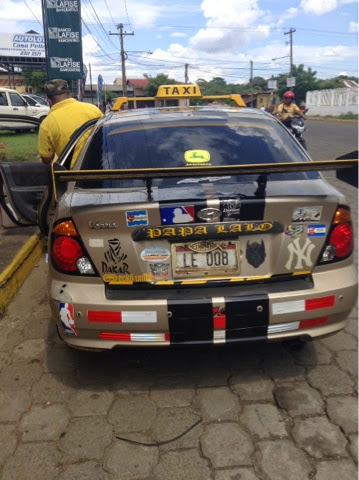 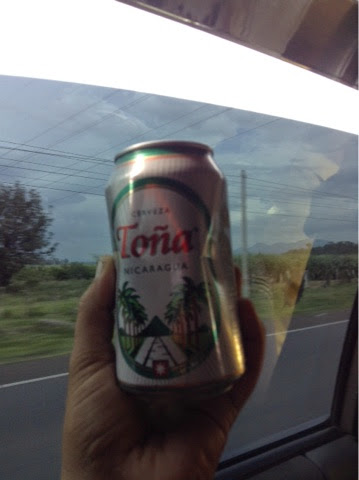 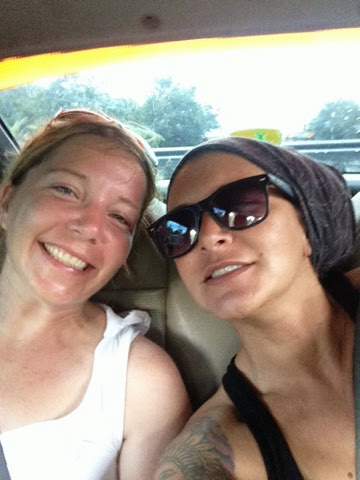 While we were having our first sushi fix of the trip (there were three) our man Carlo called to see where we were - which ended up being at the wrong side of the city, totally out of his way to come pick us up - so he got on the phone with our waitress for a hot minute and the next thing we know, we're paying our bill and quickly following the waitress outside.
I don't know what he said to this girl, but she left her job, without asking anyone, to take us outside, walk us across the highway, and get us in a taxi that would take us where we needed to go. 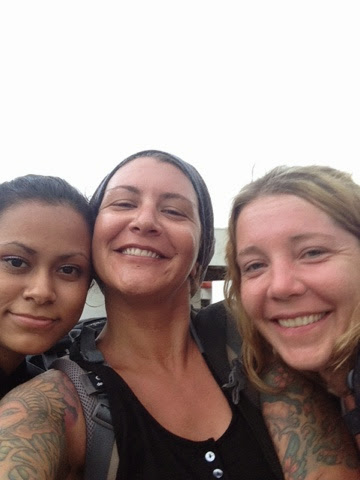 We took the taxi to the bus terminal across the street from the mall (an actual MALL, like with Radio Shack, Nine West, Kenneth Cole and escalators!) and waited there for Carlo to come get us. We went out for a few more beers, then back to his house where we stayed up drinking and talking until around 1 o'clock in the morning. (Totally inappropriate conversations)

The next morning, Carlo took Kathy golfing at some fancy place, and then he sent the two of us out with another private driver to go have a "tourist day" on our way to Granada.
That was the BEST day of the trip....

We started by going to the Mombacho Volcano - where the ride up, to about 3,940 feet, is an adventure itself.
We only walked around one of the smaller, inactive craters (there are 4, it's an "extinct" volcano with the last eruption taking place in 1570) and went to a nice look-out point to see the Apoyo Lagoon, the city of Granada, and Lake Nicaragua. None of my pictures capture how really, really cool it was up there... 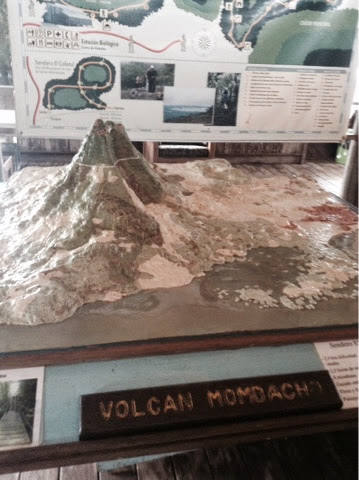 A replica of Mombacho - I'm guessing we were about halfway up. 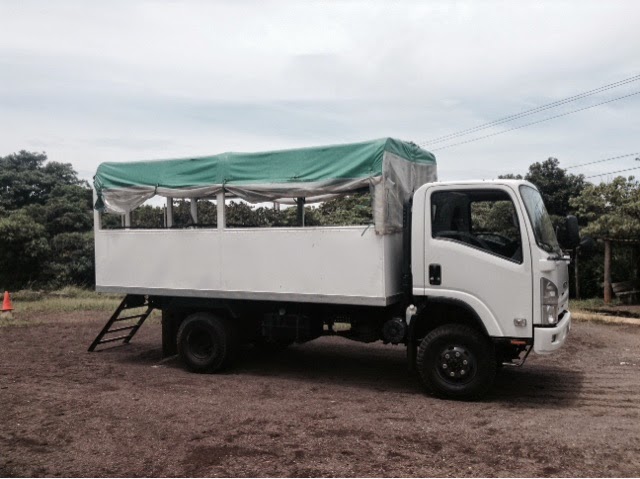 The badass truck that took us up 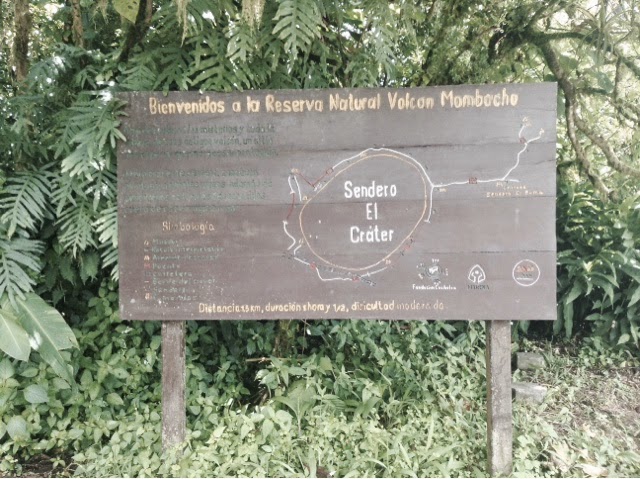 The trail we walked 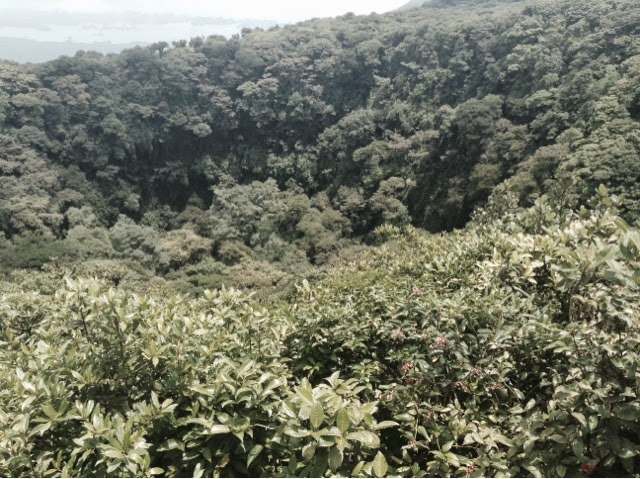 The crater...again, the picture is unimpressive, but it was really cool in person. 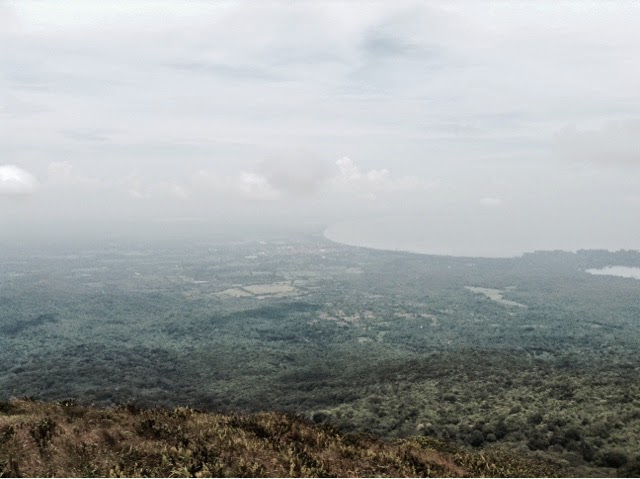 A cloudy view of Granada and Lake Nicaragua 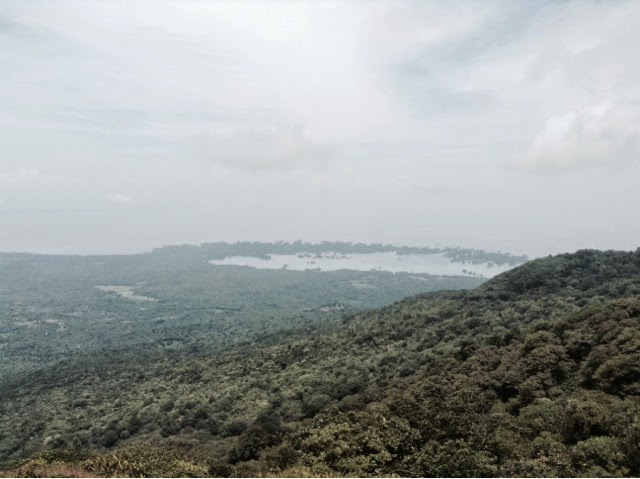 If you look closely, you can see a bunch of tiny islands in the lake - we'll talk more about them later.

After Mombacho, our driver took us to a very cute little town called Catarina, which is best known for it's amazing view of the Apoyo Lagoon.

Panoramic view - that's Mombacho you see in the distance.

We only stayed there long enough to look at some of the crafts for sale and have a beer, and then we headed to the Masaya Market for lunch. I would've liked to spend more time looking around in the market - an old fort that once housed Spanish soldiers that is now full of vendors selling locals foods, fruits and veggies, and all kind of crafts, shoes, furniture, clothing and knick-knacks - but we were on a time crunch to get to the Masaya Volcano before the park closed for the day.

Here's a picture of me outside of the Masaya Market with a lady who insisted that I buy a huge bag of cocoa powder from her.... I do so bad with pushy salespeople - she literally shoved bag after bag of cocoa into my hands until I finally agreed to buy one for $5us... and she probably would've accepted $1us if I had had a bill that small.. 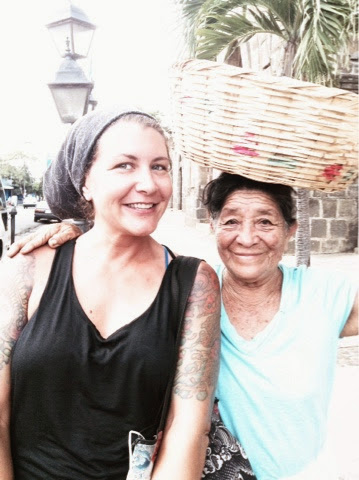 Now... the Masaya Volcano - probably my favorite stop during the entire trip...

"The Masaya Volcano National Park comprises an area of 54 km² and includes two volcanoes and five craters. The volcanoes have erupted several times in history, and were feared by both the indigenous people and the Spanish conquerors. The Spanish baptized the active volcano "La Boca del Infierno" or "The Mouth of Hell". They planted a cross, "La Cruz de Bobadilla" (named after Father Francisco Bobadilla), on the crater lip in the 16th century in order to exorcise the Devil."
"....The eruptions have had a dramatic impact on the surroundings. Rocks and volcanic ashes still cover the area surrounding the volcanoes. The nature is rough yet peaceful. Different types of vegetation appeared after the eruptions. The park is also inhabited by many different kinds of animals. The park's wildlife includes coyotes, skunks, raccoons, opossums, deer, iguanas, and monkeys.

Visitors can peek over the edge at the Masaya Volcano, and look into the impressive crater, which is continuously emitting smoke and sulfur gases. From this central crater it is possible to start hiking to other craters or viewpoints. Be sure to walk a bit up to get a view of the smoking volcano and the fascinating surroundings...."   vianica.com 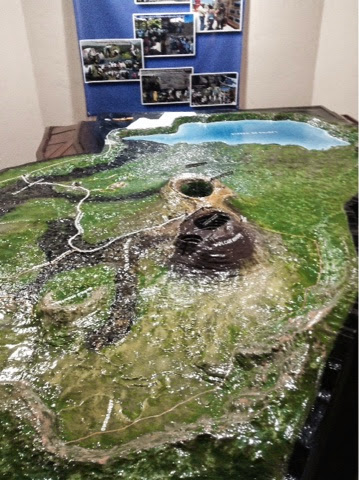 A replica of Masaya Volcano - keep thinking about those little islands in Lake Nicaragua I mentioned earlier - they were formed from lava spilling out of this volcano! 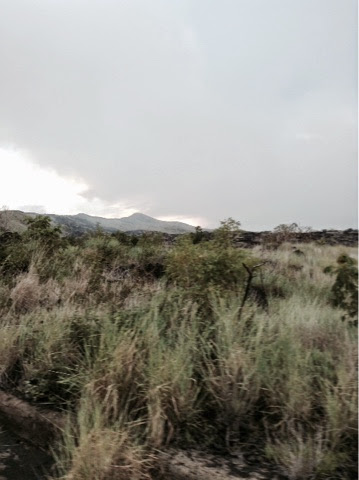 Driving up to the top - a field full of old lava rocks and the sky getting dark with smoke and sulfer gases. 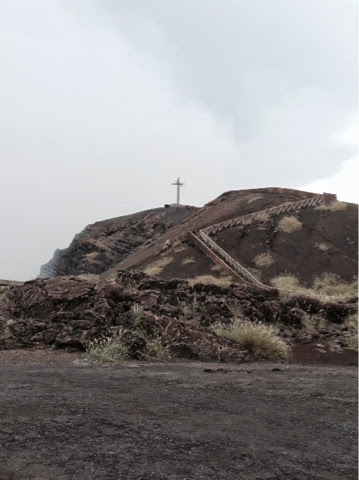 At the top - that cross, La Cruz de Bobadilla 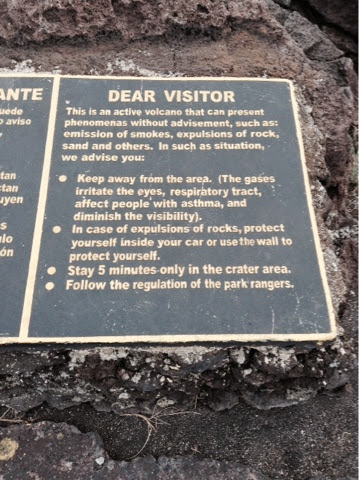 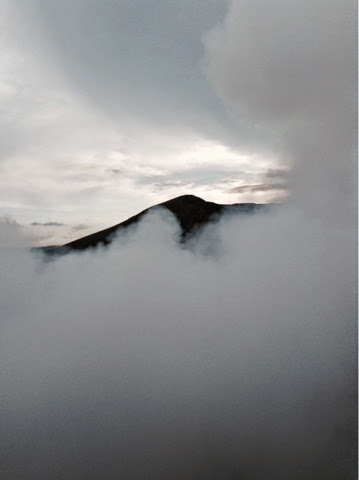 Smoke so thick you can barely see the other side 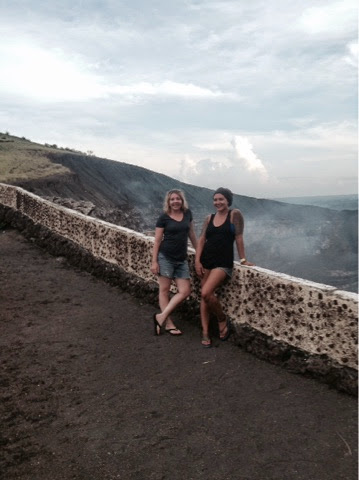 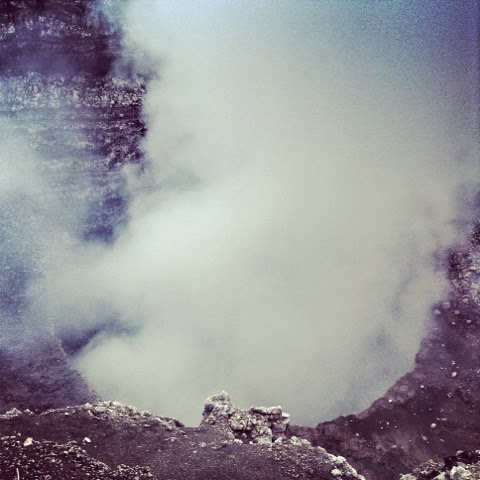 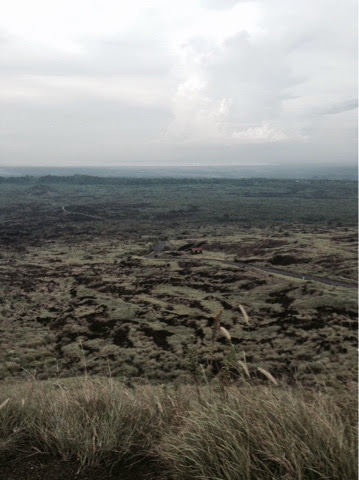 Looking down at the field covered in lava rocks.

I've seen volcanoes before, from a distance, though, so it was just super awesome for me to experience this one up close and personal.

I was going to add our trip over to the Islets of Granada to this post, but I think this one is already long enough. Look forward to my next post, Nicaragua - Part 3 - coming SOON :)
Posted by Unknown at 1:13 PM