I'm hanging out with one of the worlds coolest dogs this week - Ginga, Croc Fightah!

Back in 2009, a few months after she moved here from Canada and just about a week after her little brother Oskar disappeared, Ginger got out of her yard and went exploring at the "lake" nearby... I don't know how it all went down, and Ginger is being quiet about the whole situation, but she ended up being attacked by a crocodile and getting her stomach ripped open and her little head crushed!

After being found and rushed over to the San Pedro Animal Hospital, she went through surgery for over 5 hours and, thanks to the lovely Dr Laurie, Ginger recovered and earned herself a cool nickname. You can read the article by Ambergris Daily right here

I only met Ginger and her human, Cori, about a year and a half or so ago, and I'm so glad I did, and that I get to be her pet sitter this week :)
She is such a good, mellow little sweetheart, and I can't believe Cori actually paid me to hang out with her all week. (Which makes this my third or fourth paid pet sitting gig, so I'm adding it to my extensive resume)

Ginger is up north with me at my house (the cats aren't happy about it) and we don't have much to do this time of year with most of the resorts being closed for slow season - so we've just been going for daily walks on the beach and chilling out at home.

Here are some pictures from our first few days, and five reasons why you should totally hire me to take care of your pets in Belize the next time you leave - I'm not a "cat person" or a "dog person," I'm an "animal person."

If your pet is down with boat rides, I can pick them up
I was waiting on the dock for the 1:30 water taxi on Friday when one of my neighbors came out and offered me a ride to town on his dive boat 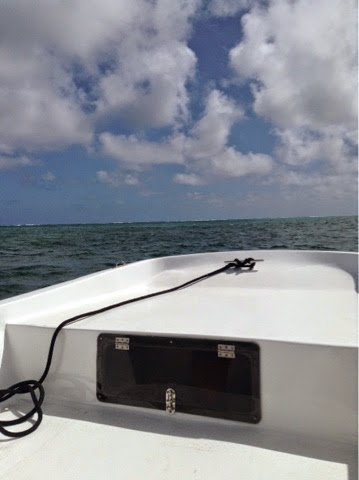 A free ride with no other stops - only took us about 12 minutes to get to town.

I ran some errands and picked up a few things, and then went and got Ginger and we hung out at Cholo's until it was time to take the taxi back up. 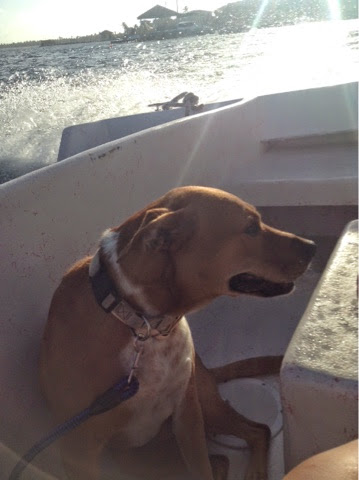 When we got home I showed her where her food and water bowls would be, made sure she had a bit to drink, and then followed her while she walked around the property for a while.

I spoil the hell out of them
I was worried that Ginger was too upset or stressed out to eat when she didn't dig into the food I put out for her. She sniffed it on the verandah, then just walked away and laid down on the sand.
I drizzled some coconut oil in it, brought it down to her, and fed her one morsel at a time until she decided to finish the bowl by herself.
Then I brought her water bowl to her.
I also mixed up some coconut oil with tea tree oil to dab on her face to help prevent a mad mosquito attack.

I went inside to use the bathroom for a hot second and when I came back out, Ginger was gone!! Luckily, I have some common sense and I know how smart she is, so I knew where she would be - I found her on the dock, waiting for a water taxi to come pick her up and take her home.

I won't sleep unless they're comfortable
My house gets super hot inside so unless you're directly in front of a fan, it's a bit uncomfortable. I blocked the steps to the verandah with my couch so I could keep Ginger secure and allow her to enjoy the outdoor breeze, but at one point in the night I woke up to check on her and she had moved the couch and was sleeping on the sand.
I slept on the couch outside so I could keep my eye on her without disturbing her sleep. Every time she got up to scratch, I got up and invited her back to the verandah, She eventually came back up and I still stayed on the couch.

I like long walks on the beach
I'll go for a two hour walk on the beach by myself, but it's better with a dog. Ginger gets a little pep in her step every time we leave the property, and she makes little doggy friends everywhere we go 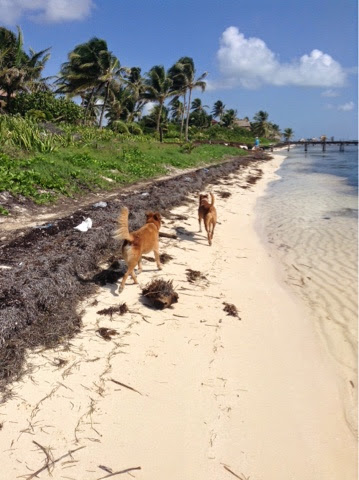 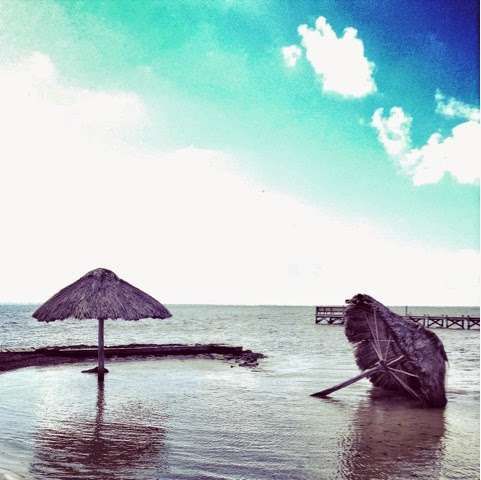 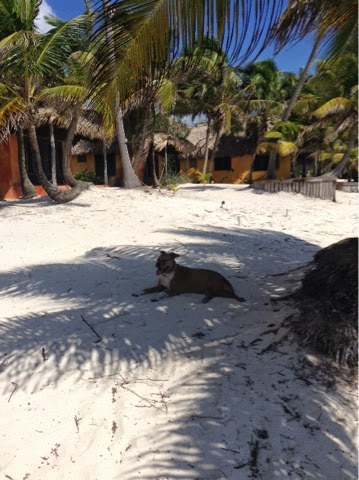 Shade pit stop at MataChica - one of the many resorts that are closed right now. Looks like they're building more cabanas. 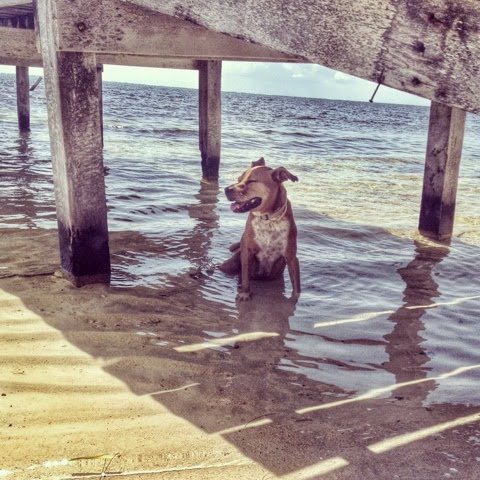 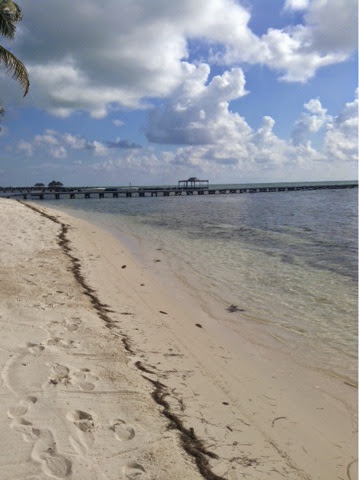 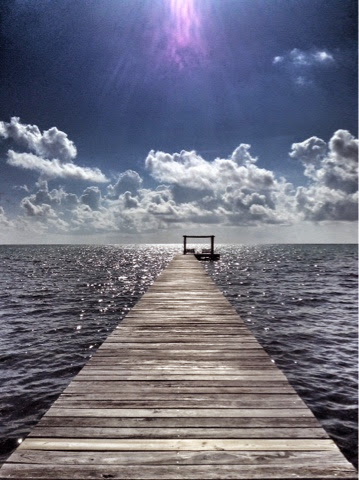 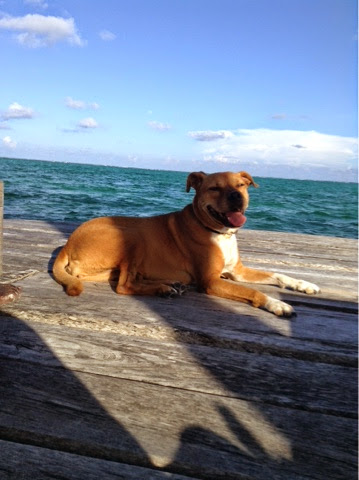 Look at that happy face!! 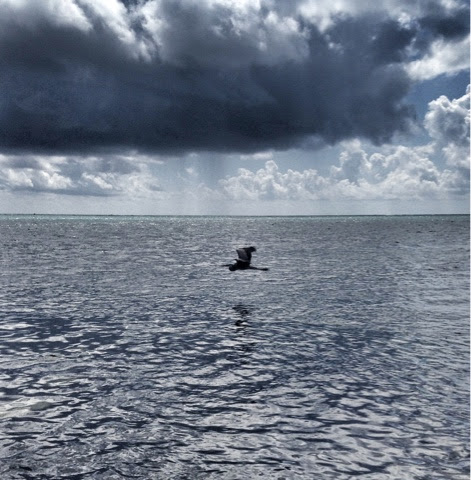 She helped me get this picture of the angry looking heron who's always flying away from me..

Monday:
It's super hot this morning - all we've done, so far, is go to the store, but Ginger made more friends and we'll be heading over to the beach to get out of this heat in just a bit 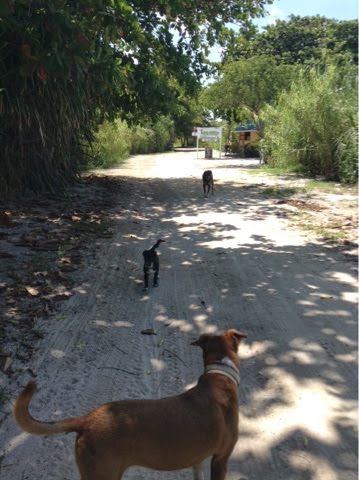 Two friends from the store following her 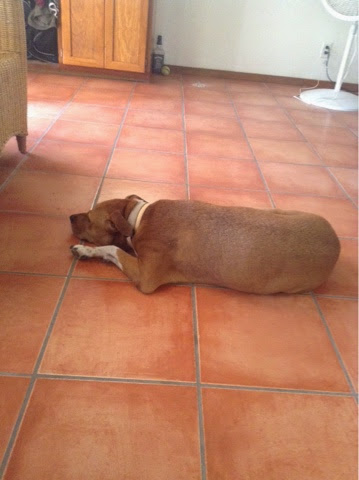 Napping by the fan right now

I'll sing to them
Ginger has at least five new (altered) songs about her right now.... "Ginger is so beautiful," (a Joe Cocker rip off) "Hey there Gingina," (a Plain White T's rip off)... You get the idea.