It's been a good two months or so since I've had any kind of spending money, or "extra" money, if there is such a thing - but I finished up my first charter of the season yesterday day and I was heading home with some cash in my pocket.

I ran into a friend of mine (Ras Gilbert) at the water taxi terminal, and he was looking kind of bummed out so I asked him what was up.
He told me he was short on money to buy his ticket home to San Pedro, only about $5bz.
I gave him a $20 and told him to hold on to the change in case he needed it, and when he said he would pay me back I told him not to worry about it.

It just feels good to be able to help someone out when you can, ya know?

He thanked me about a million times and then stepped outside while I bought my ticket.
When I finished up and went out there, he was waiting for me with another guy I recognized - this old sweetie from Rockstone Pond, which is the village that Altun Ha is in. 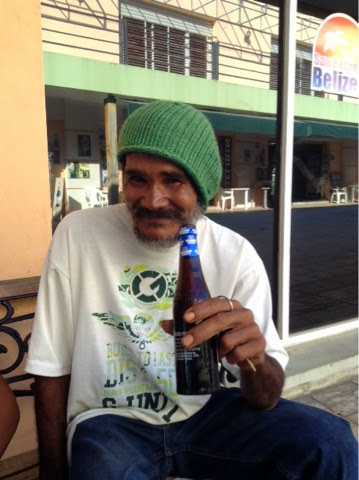 To thank me for helping him out, Gilbert gave me the most beautiful Black Orchid (the national flower of Belize) that he found while he was in the jungle in Rockstone Pond. 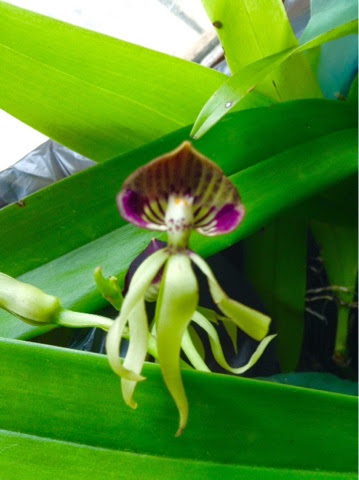 There is she, my new, smelly baby.

There are six orchids in bloom on the bunch, and they give off the most delicious scent every once in a while.

"The black orchid (Encyclia Cochleatum) is the National Flower of Belize. This orchid grows on trees in damp areas, and flowers nearly all year round. Its clustered bulblike stems vary in size up to six inches long and carry two or three leaves.
The black orchid flower has greenish-yellow petals and sepals with purple blotches near the base. The "lip" (one petal of special construction, which is the flower's showiest) is shaped like a valve of a clam shell (hence the name Encyclia Cochleatum) and is deep purple-brown, almost black, with conspicuous radiating purple veins." belmopancityonline.com

"Traditionally in the East, orchids represented meditation, purity and simplicity. They also symbolized happiness and ecstasy. Many societies believed that to consume the orchid would impart its power. The Aztecs drank the flower mixed with vanilla. The Chinese used orchids to treat breathing ailments. Some cultures even believed they could influence the sex of their child by eating different sized portions of the flower's tuber." gardenguides.com

"The meanings of the color black and the orchid marry perfectly in the black orchid to represent a message of absolute authority and power, making them a perfect gift for a new boss--a leader. Their manly connotation renders them appropriate to gift to a male or female. Black orchids would also make a good choice of gift for a religious figure, symbolizing many positive aspects of the person's service. They could be used to recognize a graduate, as a bestowment of honor. Equally, the flowers would make an excellent way to signify to a mate your wishes for fertility and your belief in his or her sexual power." gardenguides.com

This is so much better than getting my $20 back :)
He told me to just tie them up to a tree or to a post on my house, so I have a friend bringing me some heavy duty string my in a few hours and I'll find them a good spot and throw a picture up on my Instagram page.

If you go through the San Pedro Belize Express water taxi terminal often, you may know the woman who does hair braiding and nail painting.. I see her a lot and she always wants to wrap my dreads or paint my toenails but I'm always either short on cash or short on time, but I had a little of both yesterday so I finally let her give me a quick nail job. 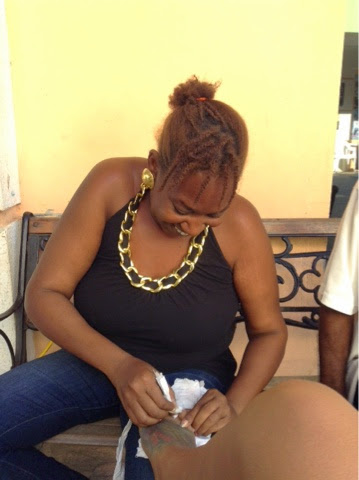 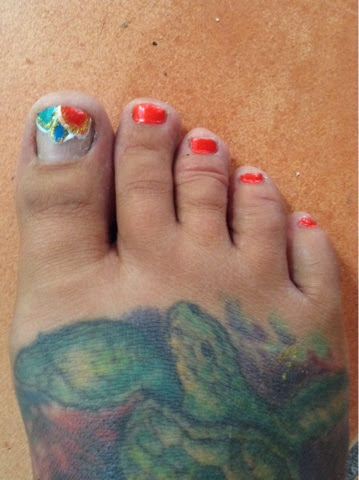 Kinda matches my turtle, eh?
Not a bad day at the water taxi joint.