So, after finding out that sweet Cheech isn't allowed to live around here anymore... I assumed that his owner had given him away while I was out on charter.
I was gone from November 8th until the 13th, and when I returned, Cheech was nowhere to be seen.

It was a few days before I heard him shaking his big head and his ears flapping around - it turns out that his owner did not get rid of him, like he was supposed to. Instead, he had been hiding Cheech inside and only letting him out, as far as I could tell, for about five minutes, twice a day.

This must have gone on for about 3 weeks - that poor dog, alone inside, all day and all night, not getting any attention and definitely no exercise.

Two days ago, much to my delight, I was walking to the Mata Grande grocery store and I heard what sounded like a small horse galloping up behind me - it was Cheech!
After some hugs and kisses, we continued walking to the store. Now, a walk to and from the store probably takes me less than 6 minutes - and during those 6 minutes or so, I observed Cheech trying to poop five times... and nothing but blood was coming out of him. I'm not talking about him having blood "in his stool," I'm saying that there was nothing but blood coming out of him.

That was the final straw, right there. I decided that there was no way in hell that I would just sit by and do nothing for this sweet dog any longer. I talked to  my landlord to let him know that Cheech was out and about (so that he could keep an eye on his cat) and I got Cheech's owners phone number from him. I texted the guy twice - first asking if he knew his dog was shitting blood, and then to ask permission to take him to the vet. I got no reply.

The first thing I did when I woke up yesterday morning, once I saw that Cheech was still sleeping on my porch, was get on Facebook and beg someone to come and pick the two of us up. Luckily, my friend Tori - the only one who offered to help - was taking a golf cart for a test drive, and she braved the puddles to come up all the way up here for us.

The drive down was somewhat hellish - being on a golf cart is never really comfortable, but add a heavy dog with long, sharp nails and a leaky anus to your lap, and it's even worse.

We made it, though! She dropped us off at Saga Humane Society, where he was checked for Parvovirus (negative) given heartworm pills, a vitamin shot, and some antibiotics ($125bz for everything - not too bad)

When asked what I was going to do with him next (they had a heads up about the situation before I got there) I told her I had no idea - I wasn't allowed to bring him back home with me, and I don't know anyone kind enough to adopt him (Ooooh yeah, I know there are people here who COULD adopt him, but no one has stepped up. jerks.)

I was told what I already knew- that he is a good, sweet dog.

They decided to keep him there at Saga. They'll get him healthy, get him fixed, and then try to find him a good home.

I guess it's all out of my hands now... all I can do is go visit him and try to be involved with finding him a nice place to live with someone who will take care of him and give him plenty of love and attention...

I'm actually even willing to move out of the house that I love and give up the swimming pool and the silent nights up north in order to have a home where Cheech is welcome - but finding a decent place, in my price range, has proven to be very difficult on this island.

If anyone knows of a nice, cheap home to rent, OR an amazingly awesome human that could possibly make room in their home for Cheech, PLEASE let me know.

I would have added more pictures to this post - I took a bunch of new ones yesterday, but I lost my damn iPod in town last night.
I don't know if I'm more upset about that or about not having Cheech around to run down the beach with. 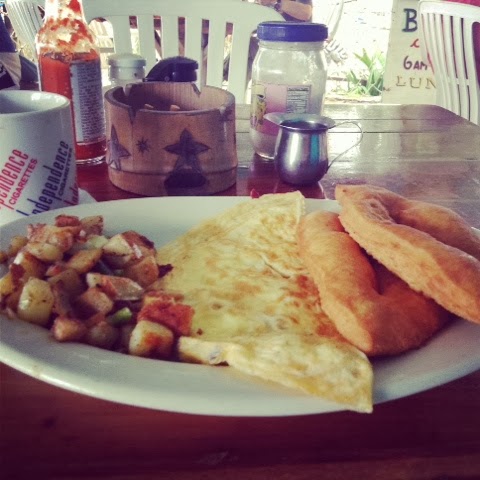 this is just a picture of what i wish I was eating right now.