Hello there! My name is Keith and I am writing on Carrie’s blog to let you all know about my fantastic time of going to the public hospital in Belize City, and may be give you an idea of what to expect and bring. 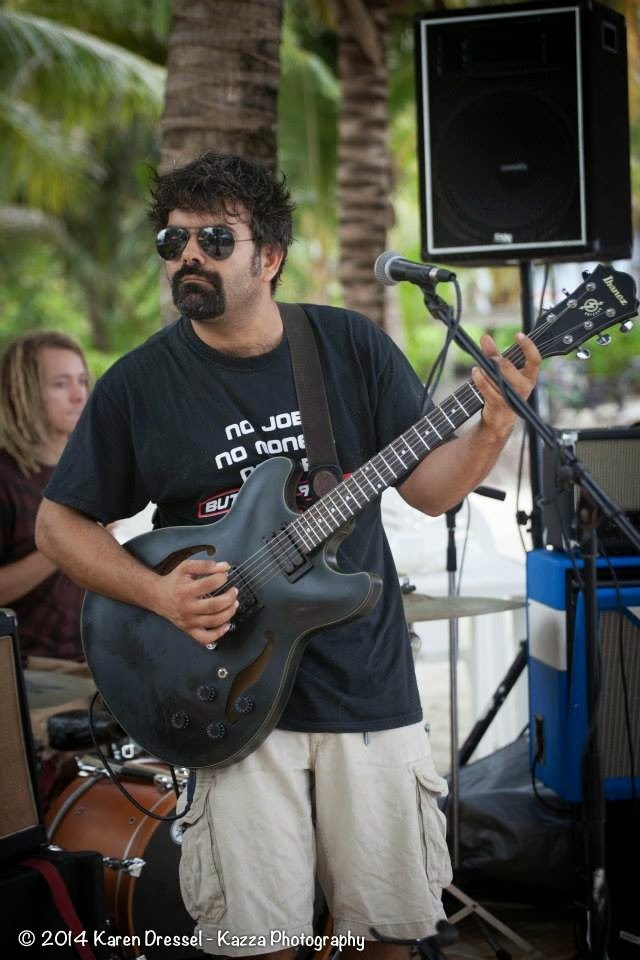 Keith!
I sing and play here on the Island for about 4 years. On my 4th anniversary here I was dealing with a high fever and what turned out to be an infection on my leg. I probably don’t need to tell you that the original injury was due to a pole dancing accident on my birthday so we won’t go into those details. The injury turned into infection and on New Year’s Day  I was told that I either go to the hospital or lose my leg.

After little consideration I decided I was not yet ready for a peg leg and pirate life. I notified my various gigs and told Amy, my complicated but lovely significant other, packed up and headed for the boat to take us to Belize City. I received the News at about 11 and by 3 we were on our way to the City.

Not really knowing what to expect (except that my stay could be as long as a week) we packed one suitcase with about 5 changes of clothes each, soap, toilet paper, our phones and chargers, my nook Ereader, a couple of paperbacks, deodorant, toothbrushes and paste, and plenty of money. We had never been to the public hospital before, but knew we couldn't afford more than a couple of nights at a private hospital (which we heard could be $800 BZ a night, after a large deposit).

Reaching the Karl Huesner Memorial Hospital was pretty simple. We knew we wanted to reach it early to start treatment quickly. We were dropped off in the front and asked (as I was directed by my local doctor) for the emergency room. They directed us toward the back and twisting through the hallways we found the emergency room.

After speaking to some nurses at a desk we were directed to the Triage Nurse who asked a few basic questions, took my weight and temp, and directed us to the waiting room. After about 90 minutes wait we were called inside, where we waited about a half hour more, before seeing the doctor. The doctor was pleasant  and asked about the original injury and when infection set in.
Then were taken to  a room where she could see my wound. 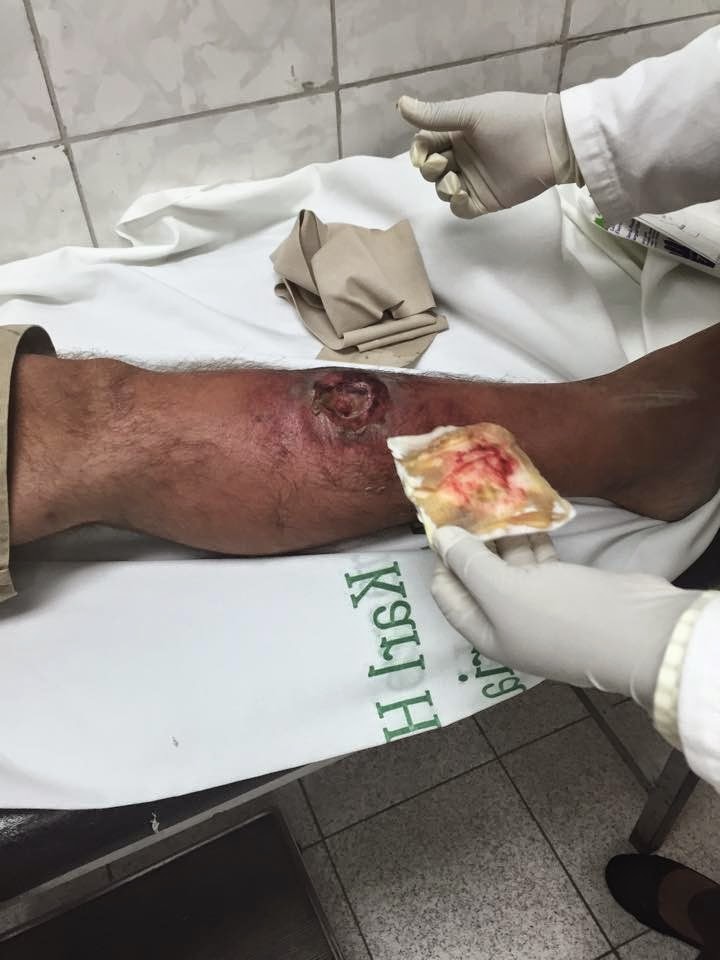 Gross!
Soon, I was placed in another examination room which would have to serve as my room for the time being. They were extremely busy and part of the surgical ward was undergoing some construction. They started me on IV’s of saline solution and soon as was placed on antibiotics. The nurses were pretty pleasant and friendly. I think it is important to remember that they are professionals and not customer service representatives. My advice is don’t be demanding if you need something just ask but just remember as bad off as you may be in the hospital there’s always someone who needs more attention. The next morning I was brought to a room with six beds and four other patients in the room. This is likely the standard experience for most going to the hospital and this room was where I stayed the next four days.

So there’s the basic story, now let me tell you what you need and what to expect on a stay at the Hospital here in Belize:

Soap: There is no soap in the bathrooms. There is hand sanitizer but that can run out.

Toilet Paper: There’s generally toilet paper in the bathroom but if not it is not the nurses job to resupply it.  Have your own ready and you won’t have to wait.

Towel: "Hey, you sass that hoopy Ford Prefect? There's a frood who really knows where his towel is." Bring a towel. You’ll figure it out.

Underwear: You may not need a change of clothes but if nothing is being worked on “down there” there is no reason to not wear some underoos beneath your hospital gown.

Entertainment: There is no TV or movie night, many patients aren’t in the mood of meeting new people, and the nurses don’t have time for conversation. If you have a smart phone I suggest Candy Crush, Two Dots, and Super Monsters Ate My Condo. Bring a book or two if you can’t just read one. Generally you want something to do with one hand because the other may get irritated with the IV needle in it. Also there is no WIFI at the hospital.

Credit: If you’re local and have a phone you’ll want plenty of credit to let people know how you’re doing and get any needed supplies.

A Good Friend: You should probably already have a couple of these, but you will definitely want someone who can visit you and bring you things like water and food. The hospital will give you water in the form of saline solution in an IV or if you can get up and drink from a fountain then go for it. Otherwise you are probably going to want to drink bottled water the old fashioned way. They can also bring you food. The hospital will feed you, yes, but trust me on this, if you don’t have a specific diet need they are addressing then you will want somebody to bring you food from someplace else. 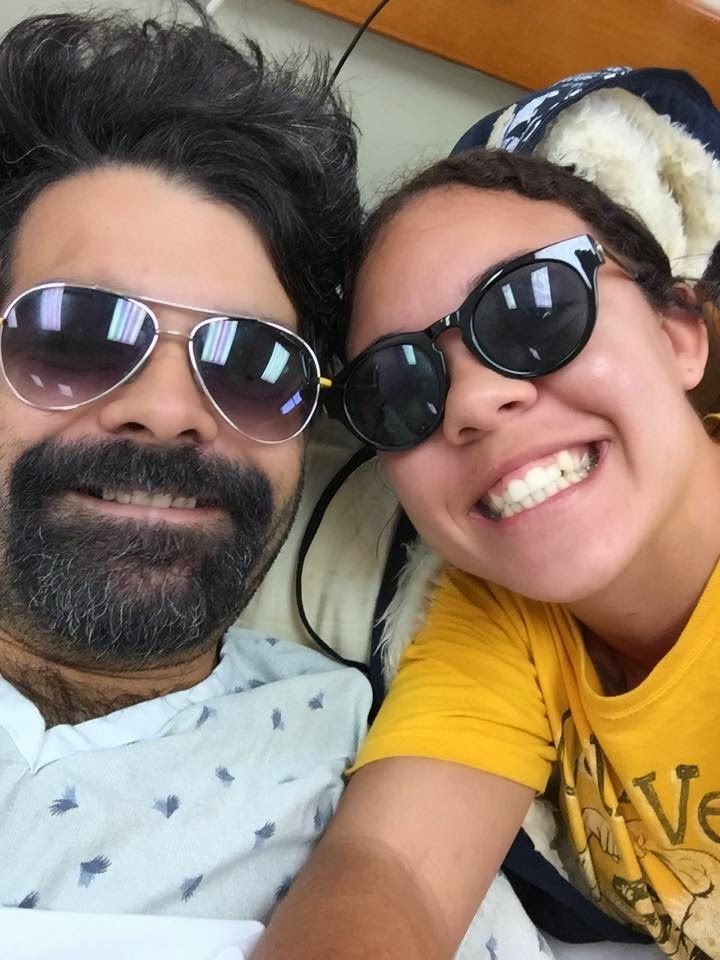 Keith and Amy
Money: Yes I know you know that you’ll probably need money or something really good to barter with. My 5 night stay cost merely $211.25 BZD. That’s $25 a night and $10 a day for drugs and the rest was tests and fees. Not bad. If you have a friend they can stay at a Hostel across the street for $10 BZD a night, or there are some hotel starting at about $50 BZD that we found. The hostel locks its door at 10pm no exceptions. We ended up spending most of the money on food and…

Something Warm: Being on the island all the time we forgot how cold being in AC all day felt, so we bought some hoodies.

That’s pretty much the basic survival guide to your trip to a hospital. Try and have a good attitude about it and you should do fine. If you can pay for a private hospital you can probably forget all this stuff and just bring money. The wound is doing much better and I will be singing and playing again soon! Adios. 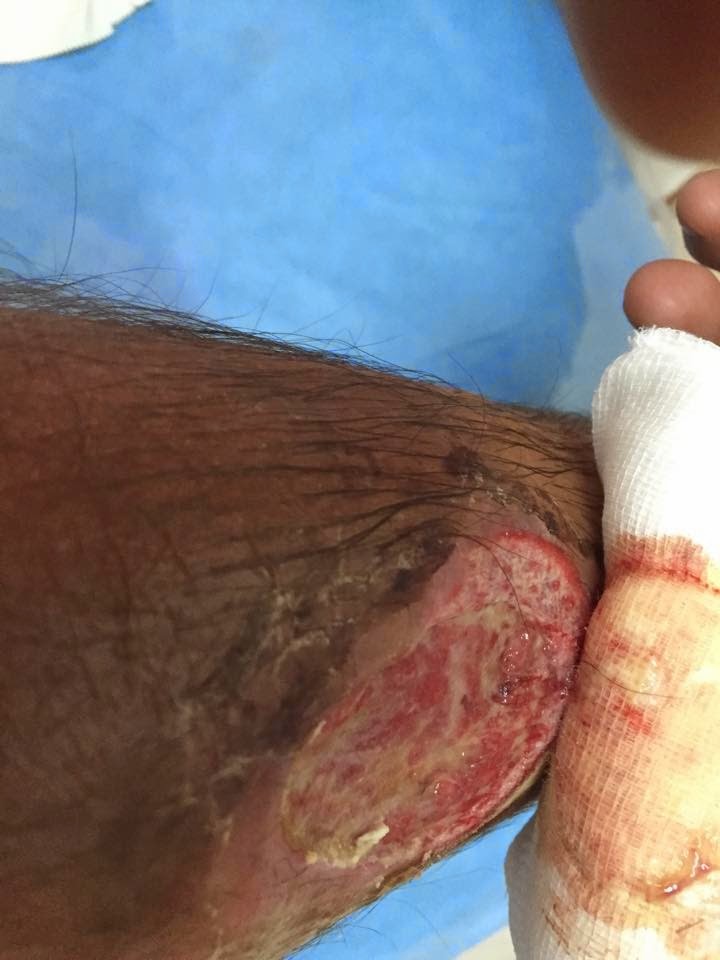