The Back Beach Escape

It's (sadly) no secret that Ambergris Caye has a stunningly beautiful beach up north and over on the western side of the island, but if you're lucky, like I have been twice this week, you can still spend a few hours up there without bumping in to too many other people.

I know it's assumed by many that, since we live on an island, we can just hop on into the Caribbean Sea from basically anywhere and have a lovely swim - but that's totally NOT the case.

On the east side of the island, where you find all the bars, restaurants, shops, businesses, docks, boats, beach front condos, etc, and you can see the waves in the distance crashing over the second largest barrier reef in the world - we  also have lots of sea grass. 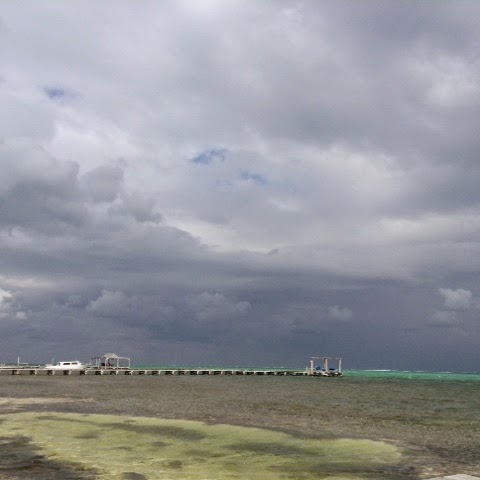 Sea that clear, sexy blue water out past the docks? THAT'S where you want to swim.

I, for one (and I know a lot of other people agree with me) think sea grass is creepy. I don't want to step in it - there could be crabs walking around down there, just waiting for a fresh toe to come by... I don't know, I just don't like it, so I don't swim in it.

There are a few, cleared out, nicer places to swim right from the beach  - like the beach at Ramon's Village or by the park at Boca del Rio - but when you have limited swimming spots and over 20,000 people on this island at any given time... you'll be sharing those spots with whoever else wants to enjoy the water that day.
Same with the docks - there are a decent amount of nice docks that have really nice swimming areas, but again, you could be sharing with a whole group of other people... and sometimes you just want your own little area! (I do, anyway)

Another reason I don't swim anywhere near town anymore - and I know some people will be furious that I'm sharing this information because it's "bad for business." but I was told by someone who tests the water that the toxicity levels are ridiculously high (fecal matter) near popular places like the Wet Willy's dock.
(Everyone calm down, not that many people read my blog so I'm sure I'm not doing any damage to the tourism industry)

So, back to the sea grass  - as you probably know by now, either through myself or through other bloggers on the island - we are having an obscene amount of sargassum wash up on our shores. It's been coming in for months now, it smells rank, and it makes swimming even less desirable than when it's just our normal sea grass creeping me out. 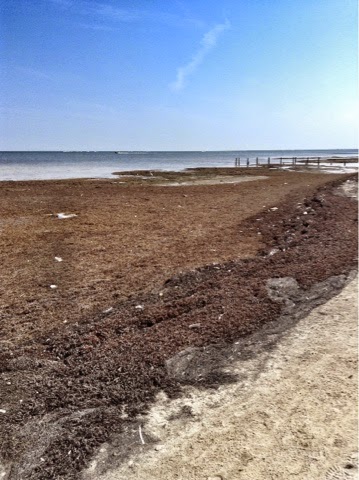 I don't even need to tell you how much nicer it is over on the "back beach," because you can just see the difference for yourself in the following pictures...

These first ones are from the spot I usually go to when I get back there: 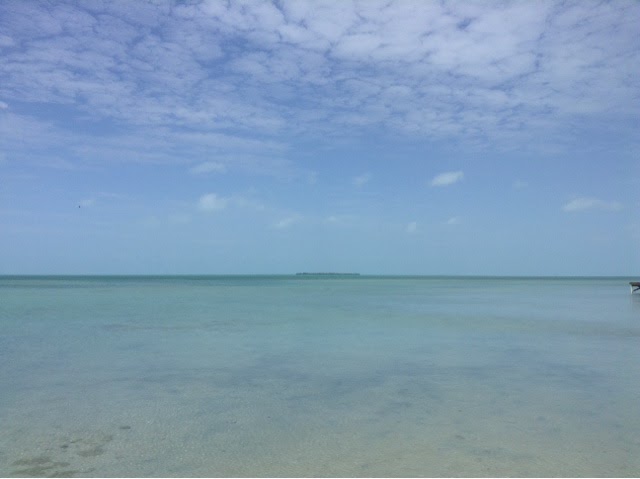 Leonardo DiCaprio's island is straight ahead in the distance. NO sea grass, NO sargassum 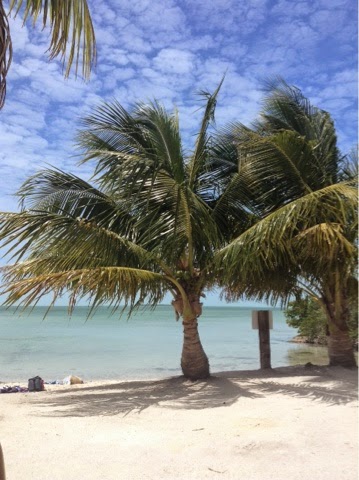 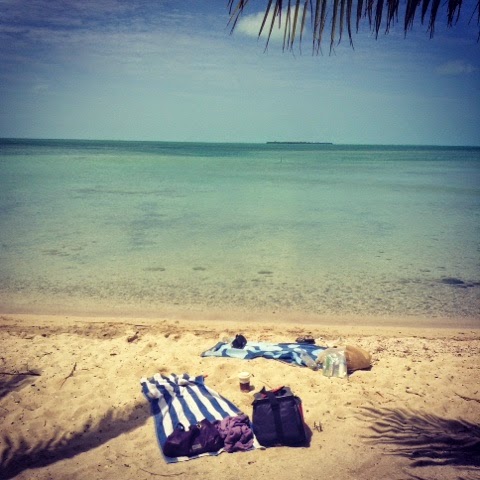 We started at that same spot yesterday, but then a family of four showed up and we decided to bounce on out of there to find a less accessible area.

We drove the cart as far as we could and then took a short "jungle walk" to get to an even better spot... 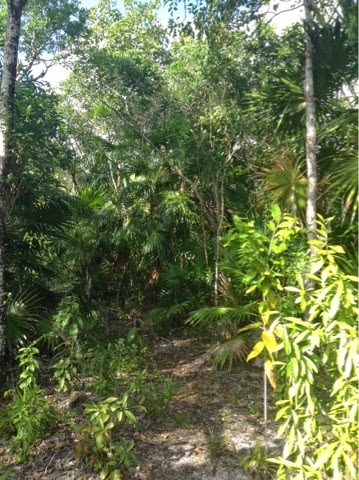 I LOVE having the feel of the jungle on the island. 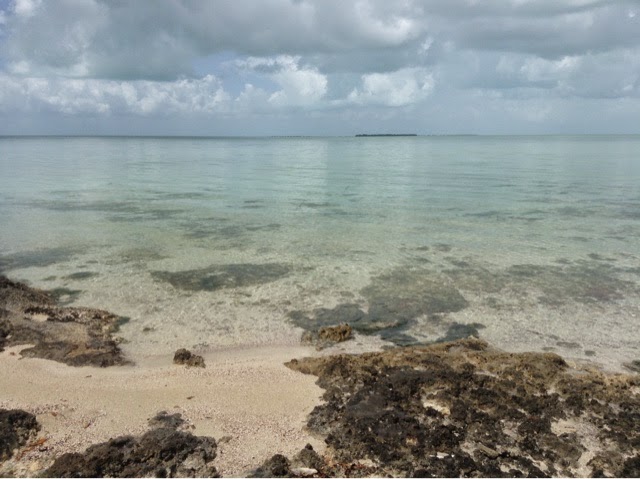 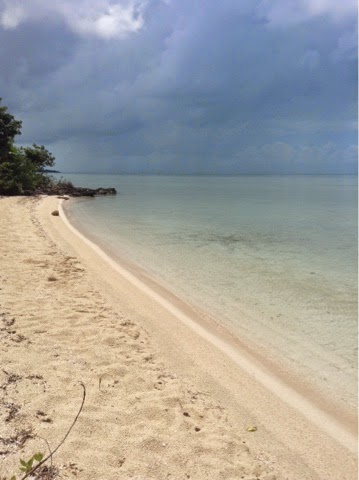 Our own private cove 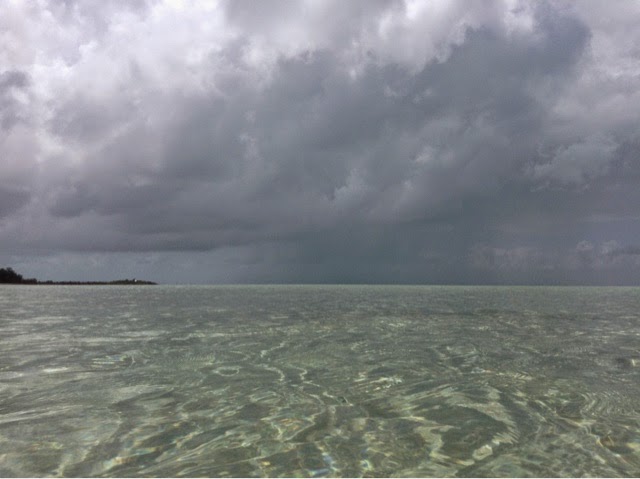 Those storm clouds you see had passed over us, but once they cleared out it was a PERFECT beach day 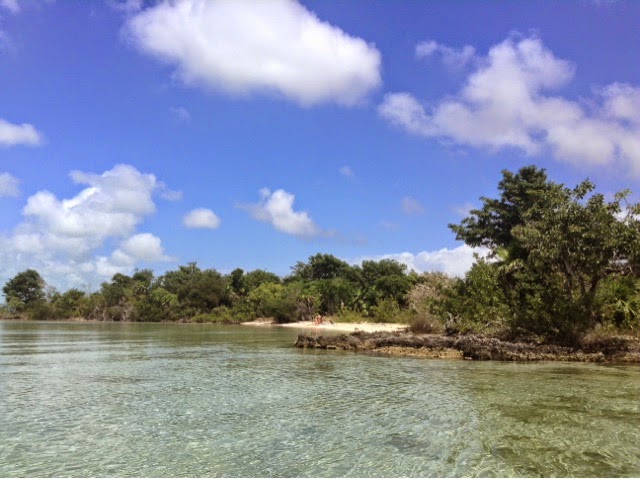 "Our" beach from a distance - the water is only waste-high for quite a way out. 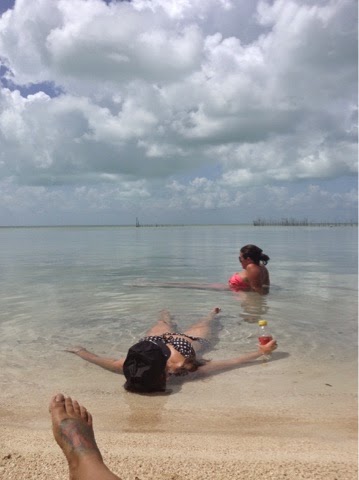 I know that one day this side of the island will be taken over by mansions and resorts, too - but for now, I suggest you go back there and enjoy it while it's still clean and beautiful.
Posted by Unknown at 10:13 AM