Observations of an Island Dweller

I posted about stopping in Dangriga back in May, and mentioned how it seems as though NOTHING has changed in the almost three years since I've been back there. Everything is exactly where I remember it being - no buildings have been knocked down and replaced with something newer, all of the stores are the same stores that have been there for years, the restaurants, food vendors, even the guys asking for change - all of it is the same, same, same.

Ambergris Caye has the exact opposite situation going on. I swear - every time I leave my house and go into town I see something different... The place I used to get great, cheap tacos for breakfast across the street from Tropic Air is gone - not closed - GONE, with new construction happening. The once-empty lot next to Annie's bakery is now a construction zone. There's another new building going up closer to the bridge, and an existing building is having a fourth floor added to it. Grande Caribe has their new, obnoxious resort building going up still, plus whatever they're up to on the back side of the island, AND a fancy new sea wall (I'm bitter towards Grande Caribe, if you haven't picked that up from previous posts)
I haven't been south of town for a while - I can only imagine how different it's starting to look down there...

Two of the most upsetting changes (in my opinion) are what's happening to the beach here on the "main side" of the island, and how crazy busy it's getting on the "back side," up at Grande Belizean Estates.....

It was just a few days ago that I went out to the back beach for a bit - and holy crap, the road construction on the way out there is blowing my mind.... 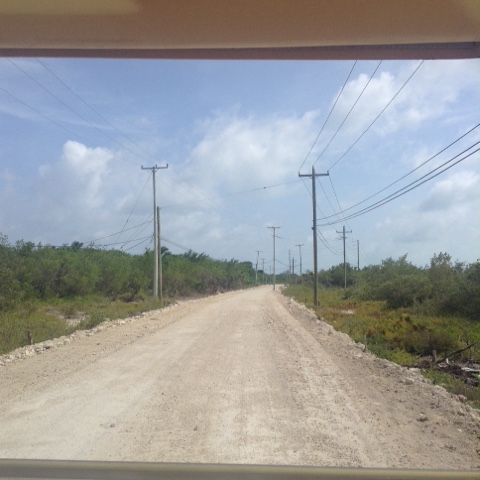 This brand new road was nothing but an overgrown trail not too long ago. It starts just after the old Journeys End resort and takes you out to the main road that leads out to Grande Belizean Estates.

There isn't a whole lot going on once you get to the GBE lots - a few small houses are popping up here and there and some lots are just being cleaned up and maintained for now... but the amount of people that go back there to hang out is insane. That used to be a spot to go and get away from tourists and hustlers...

Now - it's busy enough to have someone selling jewelry and other people running a food truck/snorkel mask rental shop. 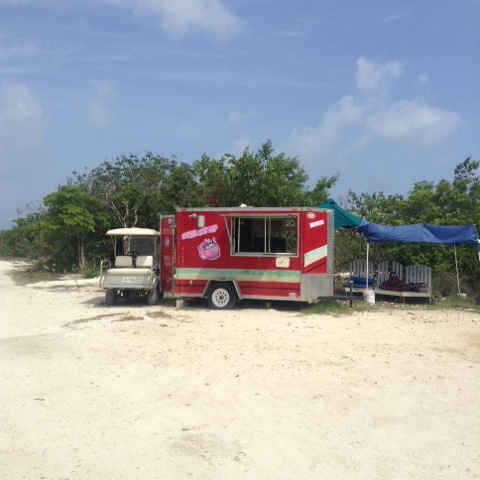 Ya know what surprises me? It surprises me that all of the big money resorts haven't starting snatching up all the land on the back side of the island yet. I mean.... if they refuse to let all of the sargassum that keeps rolling in just stay around and do its job (repairing/rebuilding the beach) then... one of these days those resorts will start toppling into the sea - just like these palm trees.... 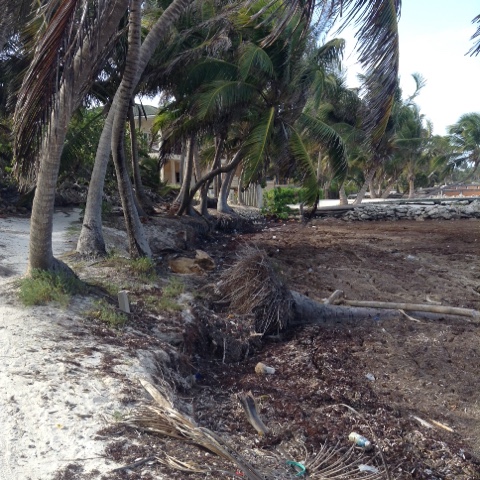 Ok maaaaaybe that's a bit dramatic - but you know what I mean. *Everyone just keeps raking it all away, and I've been thinking to myself ever since this problem started (what - a year ago?!?) .."Hmm... they should probably just leave that shit there... they're raking away beach every time they remove it.... "

Seriously - if you haven't been here in a while - the erosion is BAD. 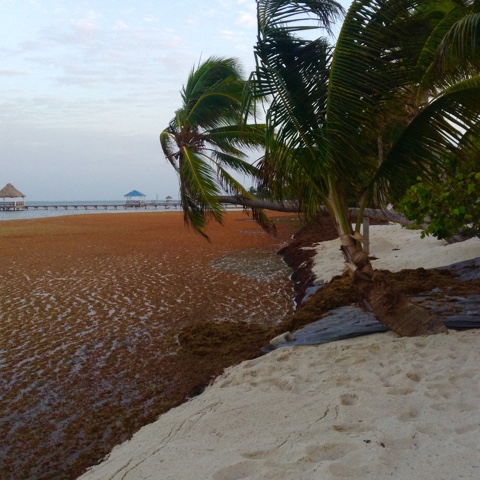 I posted this on Instagram recently- Do you see the tree that grows straight out over the water? Up until a few weeks ago, I was riding my bike UNDER that tree - when there was still a beach to ride on. 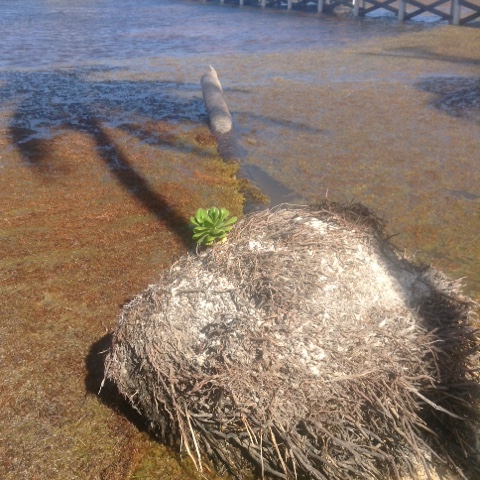 This tree started dying a long time ago, but the ground that was keeping it standing washed away...

I was super excited to read an article posted by AmbergrisToday.com - Man-vs-Sargasso: One islanders idea- Build more beach - FINALLY!! Someone who seems to have the right idea!!

"Instead of collecting and removing seaweed from the beach, which also takes away beach sand along with it, Dimas tested a method that keeps both on site and has the beach growing exponentially. In his first testing of the method he was able to add 17 feet to a beach area. It’s a simple process of collecting the seaweed and evenly laying it out on the beach; various holes are dug where as much seaweed is dumped and compacted, while the white sand from the hole is used to cover the remaining seaweed on the beach."

If I remember (it's hard to keep track of which day it is) I'll go up there on Sunday morning to see his project at work and lend a hand...

I'm STILL looking for someone on the island who can help me re-do my blog - I have ideas for it and no idea how to make them happen.
Posted by Unknown at 9:54 AM